Guest post: On the specificity of the courts, i.e., when should we assume that legal actors reflect public culture? 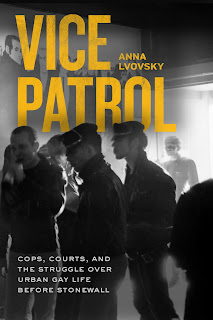 [This is the fourth in a series of guest posts by Anna Lvovsky. Her book, Vice Patrol, examines the history of antigay policing at midcentury.]

In my last post, I wrote about ethical questions raised by archival confidentiality agreements. For my final post, I want to discuss a methodological question: When should we assume that legal actors, such as trial judges, absorb more widely available cultural beliefs, and when do their more specific professional or institutional identities put them in a different category?

A central theme in Vice Patrol is the profound ambivalence inspired by the policing of gay life in the mid-twentieth century. Against common presumptions that courts in these years broadly supported the vice squads’ campaigns, many judges harbored significant qualms about the police’s arrests, and they often devised creative ways of resisting the ensuing charges. Sometimes, such resistance reflected the surprising impact of seemingly familiar cultural trends. The prevailing view of homosexuality as an illness, for example, did not simply legitimate the law’s campaigns against gay life, but also fueled judicial concerns that undercover officers genuinely “corrupted” vulnerable suspects. Sometimes, such resistance reflected the particular demographics of the judiciary. Relatively highly-educated and well-credentialed, judges were part of a social elite that, over the course of the 1950s, showed growing liberality toward consensual sexual activities. Often, however, it reflected the unique institutional pressures of the courts, from judges’ impatience with petty cases clogging their dockets, to their exposure to often-sympathetic defendants, to their sense of professional responsibility for curtailing immoral police practices.

This pattern of resistance is among the most surprising parts of the book, and the one that received the most pushback from early readers. Given the vast and well-documented homophobia that shaped public discussions of homosexuality, the objection went, why would trial judges—or anyone, for that matter—possibly have objected to the vice squads’ operations? That objection rested on the assumption that judges, as consumers of and participants in a deeply homophobic culture, must have both internalized those same beliefs and then linearly translated those beliefs into action. Excavating the reality of judicial practice, in context, required recognizing the courts as a distinct and sometimes-idiosyncratic institution—one whose unique political and pragmatic pressures shaped both the beliefs and (as importantly) the incentives of its employees.

Recognizing that kind of institutional specificity is a key reason why I love writing about the courts. But even in this one project, my commitment to that type of specificity raised some tricky questions. Given that principle, after all, was projecting prevailing beliefs onto the courts in the absence of more affirmative evidence entirely off-limits?

When discussing judicial resistance to police enticement, I’m often asked about the role of anti-Communism. To what extent did such judicial aversion reflect the status of undercover policing as a symbolically anti-American form of enforcement?  Certainly, in the years following World War II, undercover policing became deeply associated with Communist and totalitarian regimes. From spies sent to infiltrate Black political organizations to unmarked police cars, public discussions of “undercover” tactics commonly traded in the language of anti-Communism. When the popular press turned its attention to gay life in the 1960s, liberal writers criticized the vice squads’ tactics in those same terms. But in none of the records I found documenting judicial attitudes—otherwise rich sources that surveyed numerous objections to the vice squads’ methods—did that precise concern come up.

Perhaps it would have been harmless to infer that judges shared journalists’ and politicians’ Cold War-era anxieties. Unlike (say) the relative seriousness of solicitation charges, after all, nothing about the institutional logic of the courts would obviously make judges less susceptible to anti-Communist rhetoric. Ultimately, though, given the book’s emphasis on the shortcomings of projecting popular beliefs onto the judiciary, it felt profoundly hypocritical to engage in that same type of projection when it struck me personally as intuitive. Previous writers, after all, likely presumed that public support for the vice squads’ campaigns was similarly universal. In this particular case, I avoided such speculation, limiting my account of judicial views to more explicit threads found in the archives.

That said, I imagine the same question will often arise in future projects, including in cases lacking the rich first-hand evidence I had available here. In those cases, I hope to remain attentive to the specificity of the courts—but I suspect certainly don’t mean to write off more circumstantial cultural evidence altogether.

For what it’s worth, I suspect that one useful shortcut to avoid flattening the perspective of legal actors is attending not simply to those individuals’ own diversity, but also to the diversity of one’s readers. Early on in revisions, I discussed my argument about judicial resistance with a senior colleague. He wasn’t a historian or a scholar of gay life, but he was a scholar of the courts, and he had no trouble believing that judges disdained the vice squads’ petty morals charges. If anything—in a complete reversal of those earlier reactions—he wanted to know why the vice squads bothered with such charges to begin with. From his vantage point, that is, the “prevailing” view to be projected onto individual judges was not the public’s aversion to sexual difference at midcentury. It was the familiar political economy of the courts. That’s not to say, of course, that contemporary literature on judicial decisionmaking should be directly projected onto historical actors, any more than popular media accounts should be. But it provides a useful reminder of how differently seemingly familiar stories read to different audiences—and, in that, of the very concrete advantages of writing histories in interdisciplinary spaces.