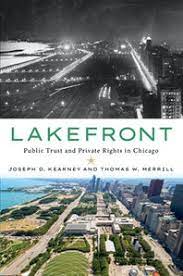 How did Chicago, a city known for commerce, come to have such a splendid public waterfront—its most treasured asset? Lakefront reveals a story of social, political, and legal conflict in which private and public rights have clashed repeatedly over time, only to produce, as a kind of miracle, a generally happy ending.

Joseph D. Kearney and Thomas W. Merrill study the lakefront's evolution from the middle of the nineteenth century to the twenty-first. Their findings have significance for understanding not only Chicago's history but also the law's part in determining the future of significant urban resources such as waterfronts.

The Chicago lakefront is where the American public trust doctrine, holding certain public resources off limits to private development, was born. This book describes the circumstances that gave rise to the doctrine and its fluctuating importance over time, and reveals how it was resurrected in the later twentieth century to become the primary principle for mediating clashes between public and private lakefront rights. Lakefront compares the effectiveness of the public trust idea to other property doctrines, and assesses the role of the law as compared to more institutional developments, such as the emergence of sanitary commissions and park districts, in securing the protection of the lakefront for public uses.

By charting its history, Kearney and Merrill demonstrate that the lakefront's current status is in part a product of individuals and events unique to Chicago. But technological changes, and a transformation in social values in favor of recreational and preservationist uses, also have been critical. Throughout, the law, while also in a state of continual change, has played at least a supporting role.

Fulsome encomia by the likes of Banner and Hartog after the jump.    "In this remarkable book, Kearney and Merrill describe how Chicago came to have one of the world's most glorious urban waterfronts. They masterfully weave together this surprisingly contingent story, relating two centuries of on-the-ground events, influential personalities, and fluctuating legal developments that together created the city's justly celebrated lakefront."
Carol M. Rose, University of Arizona and Yale Law School, author of Property and Persuasion

"A magnificent and exquisitely told story, replete with scoundrels and corrupt politicians, Lakefront solves the longstanding puzzle of the origins of the Supreme Court's famous nineteenth-century ruling in Illinois Central Railroad Co. v. Illinois and reveals its no less extraordinary epilogue, including the ruling's unlikely resurrection by 1970's activists to become powerful legal precedent for environmental protection."
Richard J. Lazarus, Aibel Professor of Law, Harvard University, author of The Making of Environmental Law

"Grant Park and the Chicago lakefront are among the nation's great public spaces. This stimulating book uncovers the troubled historical, legal, and social roots of these parklands. Consistently painstaking, judicious, and readable, Kearney and Merrill are role models for work in urban history."
Robert C. Ellickson, Walter E. Meyer Professor of Property and Urban Law, Yale University, author of Order Without Law

"Thanks to its authors' exhaustive research, clear prose, colorful cast of characters, exceptionally helpful maps, and enviable ability to illuminate for all complex concepts of private and public property, Lakefront is a wonderful read for not only those interested in Chicago but anyone who wishes to understand how urban built environments come into being and continuously evolve."
Carl Smith, Northwestern University, author of City Water, City Life and Chicago's Great Fire

"Lakefront is an excellent book that adds much to our understanding of development along Lake Michigan within the City of Chicago."
Ann Durkin Keating, North Central College, author of The World of Juliette Kinzie

"A fascinating, beautifully crafted historical account of one of America's greatest waterfront cities and the legal doctrines that shaped its development by preserving its greatest natural asset. A must read for all interested in urban history, property law, and the preservation of public spaces."
Nicole Stelle Garnett, University of Notre Dame, author of Ordering the City

"The making of Chicago's extraordinary landscape along Lake Michigan required law, lots and lots of law. That is the core insight that shapes Kearney and Merrill's Lakefront. This is a transformative study, rooted in imaginative research into arcane case files and innumerable government records, as well as illuminating mapmaking. It will be essential reading for urban historians, for students of the planning process, as well as for legal historians and for property lawyers. For those most interested in property law, Kearney and Merrill challenge sentimental understandings of the power of public trust doctrine and argue for the significance of possession and vested rights in shaping development. For city planners and others, they make a strong case, though one that will inevitably provoke controversy, that contingency and unintended consequences were more important than aesthetic vision in producing the wonder and the beauty that we admire as Chicago's lakefront."
Hendrik Hartog, Class of 1921 Bicentennial Professor in the History of American Law and Liberty, Emeritus, author of Public Property and Private Power

"The authors build their fascinating story case by case easily accessible to the lay reader. We learn how, legally or not, agencies, urban planners, individual personalities, the courts, and one railroad shaped today's uniquely beautiful Chicago lakefront."
Libby Hill, author of The Chicago River

"Lakefront provides a detailed history of the making of the Chicago lakefront. Each chapter recounts an episode of local legal history, with the authors briefly and skillfully explaining legal concepts where necessary. This is a thoroughly researched, well organized, and extremely well written book."
Stuart Banner, UCLA School of Law, author of Speculation
Posted by ernst at 12:30 PM