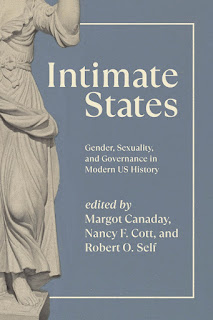 The last few decades have seen a surge of historical scholarship that analyzes state power and expands our understanding of governmental authority and the ways we experience it. At the same time, studies of the history of intimate life—marriage, sexuality, child-rearing, and family—also have blossomed. Yet these two literatures have not been considered together in a sustained way. This book, edited and introduced by three preeminent American historians, aims to close this gap, offering powerful analyses of the relationship between state power and intimate experience in the United States from the Civil War to the present.

The fourteen essays that make up Intimate States argue that “intimate governance”—the binding of private daily experience to the apparatus of the state—should be central to our understanding of modern American history. Our personal experiences have been controlled and arranged by the state in ways we often don’t even see, the authors and editors argue; correspondingly, contemporary government has been profoundly shaped by its approaches and responses to the contours of intimate life, and its power has become so deeply embedded into daily social life that it is largely indistinguishable from society itself. Intimate States makes a persuasive case that the state is always with us, even in our most seemingly private moments.

1: Reconstructing Belonging: The Thirteenth Amendment at Work in the World
Stephanie McCurry

4: The Commerce (Clause) in Sex in the Life of Lucille de Saint-André
Grace Peña Delgado

9: Sex Panic, Psychiatry, and the Expansion of the Carceral State
Regina Kunzel

10: The Fall of Walter Jenkins and the Hidden History of the Lavender Scare
Timothy Stewart-Winter

11: The State of Illegitimacy after the Rights Revolution
Serena Mayeri

12: What Happened to the Functional Family? Defining and Defending Alternative Households Before and Beyond Same-Sex Marriage
Stephen Vider

13: Abortion and the State after Roe
Johanna Schoen

14: The Work That Sex Does
Paisley Currah