Kumar on policing in South India 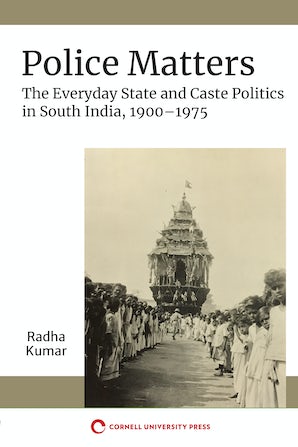 Radha Kumar (Syracuse University) has published Police Matters: The Everyday State and Caste Politics in South India, 1900-1975 with Cornell University Press. The book is available for download on an open access basis. From the press:

Police Matters moves beyond the city to examine the intertwined nature of police and caste in the Tamil countryside. Radha Kumar argues that the colonial police deployed rigid notions of caste in their everyday tasks, refashioning rural identities in a process that has cast long postcolonial shadows.

Kumar draws on previously unexplored police archives to enter the dusty streets and market squares where local constables walked, following their gaze and observing their actions towards potential subversives. Station records present a textured view of ordinary interactions between police and society, showing that state coercion was not only exceptional and spectacular; it was also subtle and continuous, woven into everyday life. The colonial police categorized Indian subjects based on caste to ensure the security of agriculture and trade, and thus the smooth running of the economy. Among policemen and among the objects of their coercive gaze, caste became a particularly salient form of identity in the politics of public spaces. Police Matters demonstrates that, without doubt, modern caste politics have both been shaped by, and shaped, state policing.

Thanks to generous funding from the Andrew W. Mellon Foundation, through The Sustainable History Monograph Pilot, the ebook editions of this book are available as Open Access volumes from Cornell Open (cornellopen.org) and other repositories.

"Engagingly written and incisively argued, Police Matters provides an extraordinary account of postcolonial policing and democracy, explaining how criminal law and procedure became a site for maneuvering between castes as Indians transitioned from colonial subjects to democratic citizens." - Rohit De

"Police Matters is a highly engaging account of the intertwined world of policing and caste politics in South India. Kumar skillfully highlights the role of the police in the creation of casted subjectivities and struggles. A must-read." - Hugo Gorringe