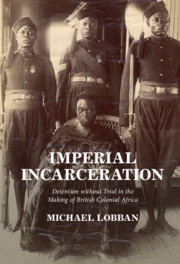 Michael Lobban (LSE) has published Imperial Incarceration: Detention without Trial in the Making of British Colonial Africa with Cambridge University Press. The book is available on an open access basis. From the publisher:

For nineteenth-century Britons, the rule of law stood at the heart of their constitutional culture, and guaranteed the right not to be imprisoned without trial. At the same time, in an expanding empire, the authorities made frequent resort to detention without trial to remove political leaders who stood in the way of imperial expansion. Such conduct raised difficult questions about Britain's commitment to the rule of law. Was it satisfied if the sovereign validated acts of naked power by legislative forms, or could imperial subjects claim the protection of Magna Carta and the common law tradition? In this pathbreaking book, Michael Lobban explores how these matters were debated from the liberal Cape, to the jurisdictional borderlands of West Africa, to the occupied territory of Egypt, and shows how and when the demands of power undermined the rule of law.

"Michael Lobban has produced an extraordinary work of forensic history-reconstructing a wide range of legal practices spanning the breadth of English dominion throughout Africa over two centuries. His book stands as a ‘truth commission’ for past wrongs and an essential precursor to any possible reconciliation." - Richard Abel

"Original and meticulously researched, Lobban’s book places the legal politics of detention at the heart of histories of rebellion, protectorates, and martial law. A valuable addition to the legal history of Africa and the British Empire." - Lauren Benton

"Michael Lobban is the leading historian of English legal thought. Here he brings his formidable talents to bear on law’s role in facilitating and regulating detention without trial in Britain's African colonies. This is at once an important contribution to history, to legal theory, and to our understanding of empire." - David Dyzenhaus