Steinfeld's "To Save the People From Themselves"

Published last month in Cambridge Historical Studies in American Law and Society: “To Save the People from Themselves”: The Emergence of American Judicial Review and the Transformation of Constitutions, by Robert J. Steinfeld, State University of New York, Buffalo: 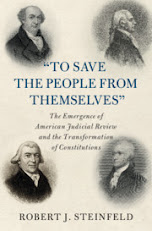 ‘In this meticulous study Robert Steinfeld examines how the distinctive US form of constitutional review emerged from a background tradition in which legislatures and executives assessed constitutionality in their regular work. Combining institutional, political, and intellectual history, Professor Steinfeld shows how the transformation was both rapid and strongly contested. Seeing judicial review as part of a conservative counterrevolution against the democratic excesses of post-Revolutionary legislatures, this is an important new contribution to long-standing discussions about judicial review in the United States.’

‘This book is a major contribution to the historiography of American law from the 1750s through the first decade of the nineteenth century, representing an important advance in our understanding of the emergence of judicial review in America. The result of Steinfeld’s painstaking investigations is to open up a lost world of what might be called ‘pre-Constitutional’ jurisprudence, and the gradual disintegration of that world as Americans came to understand constitutions, including the US federal Constitution, as a distinctive form of ‘higher law’ authority that was capable of being interpreted in the same fashion as other ‘common law’ sources. Anyone interested in exploring the origins of judicial review in America will need to reckon with Steinfeld’s research and arguments.’