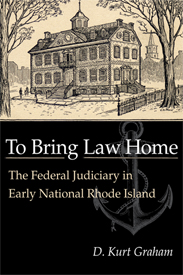 If, like me, you missed D. Kurt Graham’s To Bring the Law Home: The Federal Judiciary in Early National Rhode Island (Northern Illinois University Press, 2010), when it appeared, I recommend that anyone interested in the early American judiciary and legal profession give it a look. Although many book-length studies of individual courts have been written–see Edward A.Purcell, Jr.’s review essay–the only other one I can recall that focused on the first decades of the lower federal judiciary in a state is Mary K. Bonsteel Tachau’s Federal Courts in the Early Republic: Kentucky, 1789-1816 (1978).

Graham views the federal judiciary as a manifestation of the federal government and nation to Americans were still unsure what either was.  “No institution did more to forge [a] sense of nationhood than did the federal courts,” he writes. Rhode Island provides him with a particularly interesting case study. First, the state was “dragged into the Union kicking and screaming” and did not join until May 1790. Second, Rhode Island was known to be a benighted land of smugglers and defaulting debtors, who kept the state courts weak to escape retribution for their lawless ways. (Nowhere in the United States had “the solemnity of contracts and grants” been “so wantonly and sacrilegiously violated,” cried Noah Webster, than in “the little detestable corner of the continent called Rhode Island.”) By providing a friendly forum to customs officials, the federal district court “contributed directly to the power and viability of the central government.” Moreover, the federal circuit court was so hospitable to creditors that some moved out of state just to invoke its diversity jurisdiction. Yet Rhode Islanders, Graham finds, embraced both courts. “Federal authority took root in Rhode Island without a whimper.”

Graham’s explanation of this surprising result deserves reading in full.  In brief, he identifies three reasons. First, Rhode Island lawyers used the offices of federal judge and federal district attorney to create "a new level of leadership" within the bar and to elevate the practice of law within the state. Second, the resort to local officials to staff the courts–for four years, the same person served as state attorney general and federal district attorney–“alleviated some of the initial fears regarding the federal judiciary.” Third, the decisions of the federal courts “overwhelming favored commerce.” “Business was good for the courts,” Graham writes, “and the courts were good for business.”

I do wish Graham had addressed one question his book raises: if federal courts “generally ruled in favor of creditors,” why did the debtors who managed to overawe state judges and legislators not do more than “whimper” when hauled into federal court? Still, I learned a great deal from To Bring the Law Home, and I suspect that many other legal historians will too.
Posted by Dan Ernst at 12:18 AM