Last week I posted a glimpse of the book reviews from the most recent issue of the Law & History Review. Here's another installment:

Timothy S. Haskett (University of Victoria) reviews Dennis R. Klinck, Conscience, Equity and the Court of Chancery in Early Modern England (Ashgate Publishing, 2010). The book "reevaluates the long-assumed dichotomy between the medieval Court of Chancery as an operation of conscience, and the early modern Court as one of equity." Haskett predicts that the book "will be of great interest to historians of law, religion, theology, philosophy, and culture" because of its "fresh and thoughtful perspective."

Moving to early modern Spain, Anne J. Cruz (University of Miami) takes up Subject Stages: Marriage, Theatre, and the Law in Early Modern Spain (University of Toronto Press, 2010), by María M. Carrión. Cruz describes the book as a "lively look" at the theatricalization of marital law and the potential for resistance that women found therein.

Next up: Rob McQueen, A Social History of Company Law: Great Britain and the Australian Colonies, 1854-1920 (Ashgate Publishing, 2009).  According to reviewer George Robb (William Paterson University), the book is "well grounded in a vast array of primary sources" but also "immers[ed] in contemporary debates regarding laissez-faire, corporate responsibility, and state regulation of business." 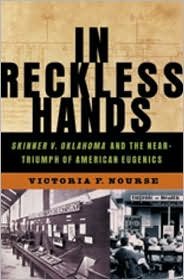 Reviewer Christopher Buccafusco (Chicago-Kent College of Law) finds much to like about David H. Kaye's The Double Helix and the Law of Evidence (Harvard University Press, 2010), which "detail[s] debates about the admissibility of DNA evidence" from the perspective of a scholar who actively participated in those debates.  Buccafusco praises the accessibility of the book but notes areas that would have benefited from "more nuanced analysis."

Stephen Siegel (DePaul University College of Law) offers a longer-than-average review of In Reckless Hands: Skinner v. Oklahoma and the Near Triumph of American Eugenics (W. W. Norton, 2008), by Victoria Nourse. Siegel praises the book as insightful and thorough. He concludes by offering a somewhat different interpretation of Skinner's meaning for modern constitutional law.

Stay tuned for one more installment.

In the meantime, the journal's full content is available to subscribers here.
Posted by Karen Tani at 6:00 AM