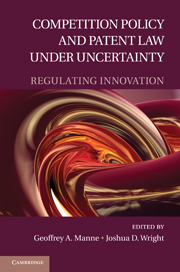 At the start of the Industrial Revolution, patentees created many novel and complex transactions to commercialize their property: they maximized their profits through sophisticated agreements that imposed restrictions on manufacturing, sales, and other uses of their inventions. When these restrictions were challenged as invalid restraints on property, courts consistently upheld them. They did so by employing the same concepts and doctrines used by common law courts to validate the creation of lesser estates or restrictive covenants for real property. In sum, early American courts incorporated into patent law the same legal doctrines governing conveyances of real estate, even going so far as adopting the common law property concepts of "assignments" and "licenses." Given widespread confusion today concerning patent conveyance doctrines, this chapter explains the structure and content of this now-forgotten doctrinal framework.

This analysis is descriptive (or positive, in economic parlance), but patent theorists today can draw at least two important lessons from it. First, it reveals how traditional property theory is determinative in patent law. Early American courts secured to patentees the same conveyance rights as owners of real estate because patents were "property." Thus, by definition, patentees enjoyed the same rights as those of landowners – the exclusive rights of use, enjoyment and disposal. Courts applied to patentees the same legal rules for conveying estates, and thereby permitted patent-owners to sue downstream infringers if there was a properly created reversionary interest. Second, patents are now defined as securing only a right to exclude, and this has unhinged patent conveyance doctrines from their firm conceptual grounding in property law. When novel issues are presented to courts concerning complex conveyances of patent rights, the result is indeterminacy and confusion in both the Federal Circuit's and the Supreme Court's decisions. Perhaps it is time to rethink how the hoary concept of property was essential to the successful commercialization of property rights in inventions in the nineteenth century.
Posted by Dan Ernst at 10:13 AM