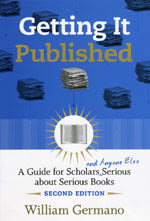 Authors write book proposals at various stages of a project. I wrote mine several months after submitting my dissertation, on the advice of astute colleagues who suggested taking a break and revisiting the project with fresh eyes. (For me, the “break” involved preparing for my first year of teaching in a law school, which was all-consuming anyway.)

Having never laid eyes on a book proposal, my first step was to impose on the generosity of friends who had recently and successfully submitted one. I recall their examples being the most helpful input in crafting my own. Several university press websites, including Harvard University Press and the University of California Press offer useful guidelines.

With some trepidation, I recently re-read my proposal, curious to see how well it conformed to the guidelines, and also how well it anticipated the content of the book that was completed four years later. I recognized the first sentence of the proposal as a line from my job talk—which may reflect that both genres are a form of marketing. “Since the 1970s, ‘women and minorities’ has been an established category in the American political lexicon.” The current HUP guidelines advise that a proposal “should give an answer to what might be called the Passover question: ‘How is this book different from all other books?’” My proposal’s third sentence might be read as doing that—“Although it is commonplace to recognize American feminists’ reliance on a civil rights paradigm to define their ideas, legal arguments, and mobilization strategies, we know remarkably little about how, why, and to what effect analogies between race and sex inequality came to dominate American anti-discrimination discourse.” Throughout, I used phrases such as “heretofore unexplored connections” and “previously untapped archival sources.”

Most guidelines for book-proposal writing emphasize that authors should discuss the audiences for whom they are writing. Is the book for specialists in one’s own field? For general readers? Will it be useful to students? Assigned in courses? In what fields and at what level? My proposal addressed none of this directly, although I do remember conversations with acquisitions editors along those lines. An anonymous commenter on a previous post in this series points out, “Legal historians face the usual challenge of being on the boundary of different disciplines with different audiences. Does one pitch the research to be of relevance only to other legal historians, or to a wider community of historians, or to non-historian lawyers?” The flip side of this dilemma is the ability to claim a multi-disciplinary audience. I could plausibly propose to reach readers interested in law, history, political science, women's studies, African American Studies, and sociology.

In retrospect, my proposal sounds surprisingly similar, at least in general terms, to what I ended up writing, but the devil was in the details. From reading the proposal, one would not have known—and indeed, I did not realize myself—how much additional research and writing from scratch would be required. (See Part I of this series). The proposal did include a very brief section titled, “Proposed Revisions,” as well as a description of each chapter. It was relatively short, less than six single-spaced pages. Then again, the next step was to send my whole dissertation to editors who expressed interest in the proposal—so demonstrating an ability to be concise may have been prudent.

Authors and editors, do you have advice for legal historians on writing book proposals?

I'd say more, but everything I know about editing I learned from North Carolina's Charles Grench, and it may be proprietary.

Okay, I will say this much: I suspect that when most of us sit down to write a proposal, we first imagine an audience of academics from our home and related scholarly disciplines. But proposals are also how professionals within the press encounter your book, once an acquisitions editor decides that it's worthy of consideration. For marketers, editorial boards composed of professionals and members of disciplines quite distant from your own, book designers and others, the more accessibly you can write, the better they will understand your book and the more likely they will be enthusiastic about it. It doesn't take much in the proposal to show savvy academic reviewers that you know your stuff. Besides, reviewers will also have a sample chapter to consult. That's where you can deliver the goods.

Dan, this is an incredibly helpful perspective, especially coming from someone with so much experience on the other side of this process. Thank you!