9/11 Revisionism in Shenon, The Commission

"Now its the revisionists' turn," says Michael Dobbs in his Washington Post review of THE COMMISSION: The Uncensored History of the 9/11 Investigation by Philip Shenon (Twelve). The 2004 Report of the 9/11 commission was praised as a "tour de force" by Arthur Schlesinger Jr. and others. Shernon's new book instead focuses on its failings. 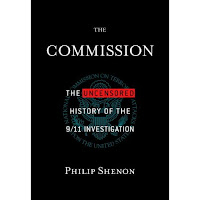 According to Dobbs, the book is "a detailed narrative of the most important government investigative body since the Warren Commission." The story's "hero, or anti-hero, of The Commission is Zelikow, a history professor at the University of Virginia, former State Department counselor and author of several books on foreign policy, including one written with Secretary of State Condoleezza Rice. Shenon recounts several conflicts of interest that might have raised questions about Zelikow's suitability to direct the 9/11 investigation."

Although the author "makes a good case that Zelikow, for all his brilliance, was often arrogant and abrasive," he is "less convincing when he argues that Zelikow used his position to try to skew the final report. As the commissioners noted in their statement defending Zelikow, the 'proper standard for judgment is the quality of the report' itself." Further, Shernon's "sourcing falls short of the standard set by the 9/11 commission. His book includes 14 pages of often vague notes, compared to 114 pages in the 9/11 report." Dobbs concludes: "Future historians will almost certainly come across evidence that the commission overlooked. But four years later, the 9/11 report stands up pretty well -- despite Shenon's dogged revisionism."
Posted by Mary L. Dudziak at 10:15 AM