Risk, Race, the Right and Teapot Dome in the Book Reviews

In this "age of terror," with scholarly institutes focusing on the significance of fear, it is interesting to have two new books out that argue that this isn't such a frightening age after all. Risk: The Science and Politics of Fear, by Dan Gardner (Virgin)and Panicology, by Simon Briscoe and Hugh Aldersey-Williams (Viking) are reviewed in today's Guardian (UK). Rafael Behr writes of Gardner's findings:

Our poor troglodyte minds are simply not equipped to process the complexity of modern living, especially where risk is concerned. We hear about a terrorist attack; we see the gruesome consequences on TV and before we can calculate the probability that we personally will be blown up, our brains have reacted as if we are being charged by a rhino: no time to think! Run!...Evolution has taught us to prioritise anecdotal evidence because, unlike statistics, our imaginations can process it into something resembling our personal experience. 'It could have been me' is a common response to news of a disaster, although usually the mathematical probability of it actually having been you is infinitesimal.

Panicked about the impact of the corporation on politics? Time for a new take on Teapot Dome. The Teap 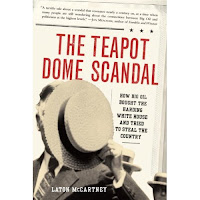 Harding was a "dark horse" for the presidential nomination. But the "Oil King of Oklahoma," Jake Hamon, shopping for a president, decided that this undistinguished senator was his man, with the understanding that Hamon would become secretary of the interior. In that position, he would try to wrest control over the naval oil reserves at Teapot Dome in Wyoming and Elk Hills and Buena Vista, Calif., from the secretary of the Navy....Hamon strewed money around the Chicago GOP convention, buying delegates and influence. Collaborating with Harding's campaign manager and political brain, the crafty Ohio fixer Harry Micajah Daugherty, Hamon bought the nomination for Harding, according to McCartney. Alas, Hamon never took office. His mistress shot him.

The legacy of Jim Crow is more pervasive than Ford allows. He suggests, for example, that the incompetent response to Hurricane Katrina can be attributed to President Bush's narrow political self-interest, not to his racism. But Ford doesn't address the modern Republican Party's calculated strategy to become the party of segregationists and white Southerners. Similarly, if discrimination against Spanish speakers seems distinct from race in the abstract, language was an unsubtle proxy for race in segregated schools, workplaces and jury pools in the American Southwest for much of the 20th century. But this history only heightens the urgency of t 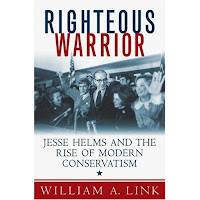 oday's problems, to which Ford, in his pragmatic and passionate effort to redefine civil rights, brings a jolt of clarity.

Finally, Eric Arnesen, University of Illinois, reviews William A. Link's new book Righteous Warrior: Jesse Helms and the Rise of Modern Conservatism (St. Martin's) for the Chicago Tribune. He finds it "a judicious and comprehensive biography of Helms, a man who 'left a permanent stamp on late-twentieth-century American public life,'" noting that "the book is, if anything, overly kind to its subject."
Posted by Mary L. Dudziak at 11:27 AM