Al Brophy, University of North Carolina, has a great post up today at Faculty Lounge. With his permission, I am cross-posting. Here's Al:

Amidst all the talk of probate in the old South, I've been meaning to talk about another paper that Sarah Ludington and Mitu Gulati and I have up, "App 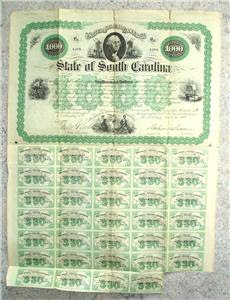 lied Legal History: Demystifying the Doctrine of Odious Debts." The short version here is that Sarah and Mitu have previously written about the historical "origins" of the doctrine of odious debt. The doctrine allows successor regimes to repudiate the "odious" debts contracted by predecessor despotic regimes under certain, limited circumstances.

Those limited circumstances required that the debts were incurred by a despotic ruler, used in ways that did not benefit the people, and the creditors were aware of the illegitimate use. Alexander Sack, who spent his later career as a law professor at NYU (and before that had practiced law in France) is credited with establishing those circumstances. Sarah and Mitu explode a bunch of myths about Sack in this
paper. They show that Sack more or less created the doctrine; it sprang more from his mind than from well-established state practices. (And though he's too modest to admit it, people will be writing papers about Mitu in another generation, talking about how he and a small group of other scholars and practitioners, including Robert Thompson of Vanderbilt and Lee Buchheit of Cleary, "re-discovered" and thus created the doctrine anew. The lawyers were building on the work of two economists, Seema Jayachandran of Stanford and Michael Kremer of Harvard, whose article, "Odious Debt," in the American Economic Review in March 2006, did the primary work in resuscitating the debate over Odious Debts. They'd been working on this for years before their paper came out -- an earlier version appeared in 2002 at the NBER (here's a 2005 version of their paper).

Jayachandran and Kremer brought this into the public discussion through a series of articles and Op-Eds in places like the Wall Street Journal. Among economists, a big question is whether to have ex ante or ex post solutions (the ex post decision making that courts engage in strikes them as inefficient). The lawyers, on the other hand, see the request for ex ante labeling of regimes as good or bad as impractical. So we have a typically turf conflict between the economists and the lawyers, which is worth some more comment by someone more knowledgeable than me at some point.

Ok--back to "Applied Legal History." What we wanted to do in our paper was to go behind Sack, to look at the pre-history of odious debts, particularly in the United States. We looked at instances in which the United States repudiated (or countenanced repudiation) before 1920, as a way of trying to figure out what the doctrine of odious debt was, even before it was given that formulation by Sack. 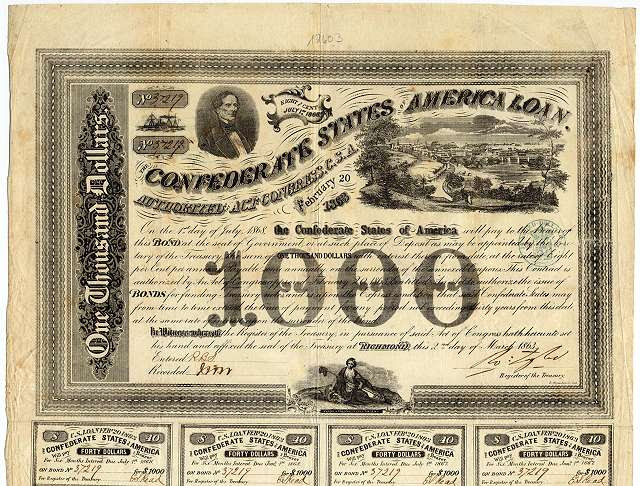 What interested me in particular, as a historian of the nineteenth century South, was the repudiation of Confederate debt. When I first heard Sarah and Mitu talk about their work some years ago (and about Sack writing in the early twentieth century), I wondered where the United States' experience with requiring repudiation of Confederate debt fit? (That was required, of course, by the fourteenth amendment; but I wondered how the United States' toleration, indeed demand, for repudiation might have conditioned lawyers and politicians to accept repudiation by other countries. And what was particularly interesting was that Sack didn't talk about the repudiation of Confederate debt at all -- even though it was a common theme in culture. Why just the other night as I was flipping channels I stopped to watch a few minutes of "Gone with the Wind." Wow--really offensive tropes at work there, but that's a post for another time. Anyway, in one scene Scarlet is talking with her father, who's holding a bunch of worthless Confederate bonds.)

So we set off to working on this -- Sarah and Mitu on the twentieth century repudiations that they know so well and me to the repudiations, both pre and post Civil War, in the south (and to a lesser extent in the pre-war North). What we found was not one "doctrine" but multiple doctrines that contemplated the repudiation of debts by sovereign states. At least in the nineteenth century, a lot of this involved questions of politics -- what could Mississippi and Pennsylvania, for instance, get away with in terms of scaling back of debt or repudiating it entirely? Could they
sell to voters (and legislators who might want to try to raise money again through bonds) repudiation? (The eleventh amendment made it very difficult to try to reclaim money from the states, investors figured out some ways of getting around the eleventh amendment, more or less, by the early twentieth century.)

And in the post-war South, repudiation took place in the wake of Reconstruction, when white southerners retook control of their states from the carpetbaggers, scalawags, and recently freed slaves who had control of the southern legislatures until around 1877. After 1877, some southern legislatures repudiated the debts incurred by the Reconstruction governments. Ah, you never know in what place a doctrine will be found or who will use it, do you? All of which makes me think there's a creative, short article to be written, entitled, "The Jim Crow Origins of the Odious Debt Doctrine."

I think the paper's an exciting look at debt repudiation, which helps give a richer picture than has been available in the legal literature up to now about the pre-1920 instances of repudiation in US history. (A lot of this is well-plowed by economic historians, though they are somewhat less interested in the legal mechanisms of repudiation -- so I think one of the key contributions of this paper is in getting a couple of discrete fields talking.)

What may warrant more comment is the title, "Applied Legal History." Our thought was this was a piece of going back and doing serious history (or in the case of my section, mining the secondary literature by economic historians), with the intent that it also serve some purpose in contemporary advocacy regarding odious debt. At some point I'd like to talk more about this, because it goes to a really central question for historians (and legal historians): to what extent are our questions and research
agendas driven (or should they be driven) by contemporary questions? Over at the legal history blog, Mary Dudziak and Dan Ernst engage these questions with some frequency. One important discussion there is that between Gordon Wood and Robin Einhorn over Wood's review of Einhorn's American Slavery, American Taxation in the NYROB. A lot of historians (Wood prime among them) question history with a specific advocacy purpose. Perhaps legal history is particularly well-suited to at least some instances of "applied" scholarship because questions of past experience are so closely related to current interpretation of law. That is, legal history may have a particular role to play in cases like the interpretation of odious debts. But on the larger issue of "applied history" I hope to have some other thoughts shortly.

"Odious debts" have been the subject of debate in academic, activist, and policy circles in recent years. The term refers to the debts of a nation that a despotic leader incurs against the interests of the populace. When the despot is overthrown, the new government-understandably-does not wish to repay creditors who helped prop up the despot. One argument has focused on whether customary international law supports a "doctrine" of odious debts that justifies non-payment of sovereign debts when three conditions are met: (1) the debts were incurred by a despotic ruler (without the consent of the populace); (2) the funds were used in ways that did not benefit the populace; and (3) the creditors were aware of the likely illegality of the loans. Advocates of this doctrine, which was synthesized by Alexander Sack in 1927, typically cite two examples of U.S. state practice for support: the negotiations between the United States and Spain following the Spanish-American War, in which the United States repudiated Cuba's colonial debt, and the Tinoco Arbitration, which repudiated certain debts of the deposed Costa Rican dictator, Frederico Tinoco. Those historical precedents do not support the first condition of Sack's doctrine of odious debts, but do support the second two requirements. In addition to these two instances, United States history is rich with examples of debt repudiation by states. Those examples suggest a doctrine of odious debts that is broader and more flexible than the one written by Sack. Indeed, it may be appropriate to
speak of the doctrines (not just doctrine) of odious debts.

The first image is a South Carolina bond from 1869, which was issued by the Reconstruction South Carolina government. The second image is of a Confederate States bond, with a picture of Richmond. And dig the train crossing the James River! Gotta love the icons on Confederate money and on bonds--from all over the world--too.