Weiner on Central Authority in Iceland

It’s now our second week in Iceland, and our exercise in legal history tourism is rapidly drawing to a close.  Tomorrow we arrive in Akureyri, where we’ll settle into our apartment and I’ll eventually teach a course on U.S. constitutional law to Icelandic law students.  Stephanie and I will be glad to give our heroic car a rest and to be in one place for a while.  It’s been very exciting to get to know this fascinating country in the intensive way we have—our cultural modus operandi has been not simply to burn the candle at both ends, but to grasp the candle and thwack it relentlessly on the pavement—but if we eat one more lunch of salami and gouda on rye crackers while huddling by the side of a gravel road we may reach some kind of psychological tipping point.  In any case, before writing about the mechanics of applying for a Fulbright and what fellowship opportunities exist for legal historians, I wanted to begin to wrap up the line of thought I’ve been developing about public legal history by turning attention back to three sites we visited toward the start of our journey: Thingvellir, Skálholt, and Reykholt—the site of the national chieftain assembly, the historic seat of Icelandic Catholicism, and the home of the great chieftain and historian Snorri Sturluson.

There are two ways one might understand the relation between these key places in Icelandic legal development.  One is for the story they tell about central authority—a story still ongoing today as Icelanders contemplate joining the European Union, an especially attractive possibility in the face of the financial crisis.  The story begins at Thingvellir, the meeting ground of the Althing during the Commonwealth Era (ca. 930-1262).  The Althing often is described as a “national parliament” or, still more misleadingly, as an early democratic government, but as an assembly of 39 powerful chieftains, or go∂i, it probably bears closer relation to the various tribal jirgas or the loya jirga of Pashtun Afghanistan (which, like medieval Iceland, is a remote, ethnically homogeneous culture with a proud warrior tradition regulated by a strict code of honor and shame).  It was a gathering of leading men and their followers.  What’s exceptional about law and government in medieval Iceland is that the Althing boasted a sophisticated legislative and judicial apparatus, but it entirely lacked a central executive office—there was no king.  Without this central mechanism for enforcing legal judgments or settlements, the resolution of disputes in Iceland always threatened to break down and become overwhelmed by the cultural logic of feud.  Many of the great medieval sagas depict the gory end result when Icelanders “bargained in the shadow of the law” in the absence of a strong executive.  Thingvellir represents the fragile social stability this settler society managed to achieve through its highly unusual legal structure.

The historic site of Skálholt points toward the next crucial episode in the story of Icelandic central authority.  As I discussed in my previous post, Icelanders collectively adopted Christianity as part of an extraordinary legal arbitration at Thingvellir in 999/1000.  Without a common religious basis for the legal order, it was clear to many that the society would descend into chaos.  “It will prove true that if we tear apart the law,” announced the pagan lawspeaker Thorgeir, “it will also tear apart the peace.”  The path toward conversion which Thorgeir announced in his momentous decision, described here and in Njal’s Saga, resolved this constitutional crisis by uniting Icelandic society under a single faith—one which, notably, was opposed to the pagan Germanic culture of honor and fate that underlay the blood feud.  Here is a diorama of the Althing housed in the Saga Center in Hvolsvöllur that suggests just how deeply linked religious and legal unity remain in contemporary national iconography: 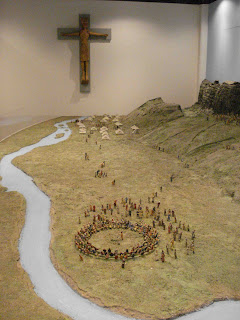 As the first bishopric in Iceland, Skáholt was the administrative center of the common faith Thorgeir declared—and for centuries, it was the very heart of Icelandic intellectual and cultural activity.  Here is what it looks like today: 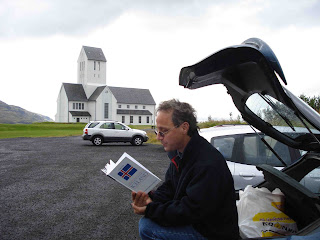 At Skálholt: with apologies, an image of a legal historian in action ...
But like Thingvellir, Skálholt, embodies centrifugal as much as centripetal forces in Icelandic law and society.  Most important, it seems that as the church acquired ever greater amounts of land, it increased the competitive pressures between the chieftains—who still lacked a central authority to prevent themselves from fighting—thereby furthering a tendency of the most ambitious, conniving leaders to accumulate power.

In time, from an original group of 39 chieftains, a group of six chieftain families came into dominance, leading to an era of political intrigue, feud and, ultimately, all-out civil war known as the Age of the Sturlungs (ca. 1220-1262).  One of the greatest chieftains involved in this bloody business, happily, was also a historian: Snorri Sturluson (1178/9-1241), from whose family this period of history derives its name.  Among Snorri’s historical works are Heimskringla, a history of Norwegian kingship, and the study of Germanic mythology known as The Prose Edda (without which, no Ring Cycle, much less The Lord of the Rings).  Snorri had his seat of power in Reykholt, where there is now a medieval studies research center and a historical museum run by the parish church.  According to Evy Tveter, the welcoming project manager of Snorrastofa, about 100,000 visitors come every summer to gaze upon Snorri’s bathing pool (or at least its reconstruction in a place nearish to where it might have been), and perhaps also to contemplate the fate of the Icelandic commonwealth in the wake of the bloody Sturlung era. 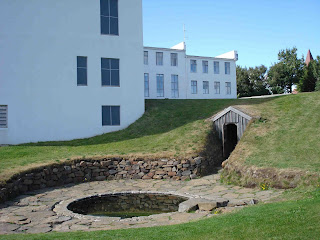 Snorri’s fate was telling of his times.  After intriguing with King Hákon of Norway, the tables turned on him when he returned to Iceland without the King’s permission.  Hákon called on another chieftain, Gissur, to kill Snorri, and though Snorri briefly eluded his assassins when Gissur broke into his home at Reykholt with a force of seventy men as Snorri was sleeping, he eventually was stabbed to death in his cellar.  By 1262, the Icelandic chieftains, tired to fighting, essentially gave over authority of the island to King Hákon, and Icelandic independence remained in abeyance until 1944.

So the story of Thingvellir, Skálholt, and Reykholt is a story of the fate of a Germanic nation which failed, in contrast to Anglo-Saxon England, to develop a strong, central authority—to make the transition from Beowulf to Alfred.  It’s a story that reveals that an otherwise sophisticated legal system cannot survive without an executive mechanism for containing the sort of centrifugal forces that ultimately tore medieval Iceland apart.  It’s the story of law in the shadow of the feud.  But there also is another way of seeing the connection between these sites, and that is for the challenge they pose to public historians.  And it’s a substantial challenge they pose, because at all three sites, few material artifacts from their medieval history survive.  What exists is only landscape and public remembrance.  How contemporary liberal societies choose to remember their particular legal history is an essential element of the cultural foundation of the rule of law, and thus how Iceland configures the relation between landscape and legal memory is something I believe will change substantially as the nation addresses the economic and constitutional issues of its present historical moment.  But as I’ve already taken your attention long enough, I’ll defer those thoughts, part of a materialist cultural history of legal memory, until next time.