Weiner in Iceland: on public history

In my previous post I noted that the relation between law and the sense of place in Iceland seems to pose a special challenge to public historians and curators. I’d like to elaborate on that challenge in this post, though the relation between legal history and the sense of place here doubtless will be a continuing theme for me as a guest blogger. And speaking of the sense of place, I should preface this post by indicating where I am. I’m writing from the small coastal town of Vopnafjör∂ur, in east Iceland, having driven today through some of the most desolate countryside we have ever encountered: acres upon acres of once-fertile farm country laid to waste by a volcanic eruption in 1875, leaving nothing but ash and pumice as far as the eye can see. Our hotel is down the street from a fishmeal processing plant, and the odor of fish on the main drag is so pungent that Stephanie and I had to shield our noses with our shirt sleeves as we entered the tourist information office. The wind is blowing wafts of the scent across my desk as I type, though it’s surprisingly pleasant from this distance. (Driving through Iceland one gains a visceral sense of just how dependent the country is upon the economically volatile fishing industry, much to its detriment given the colliding forces of the Nordic welfare state and intense consumer aspiration—about which more in a future post, as I believe the continuing clash of those forces will deeply influence how this country approaches its history.)

As I noted last time, the symbolic heart of Icelandic national identity, Thingvellir, is a landscape of legal memory. Thingvellir is a geographic concretization of legal historical consciousness. Much the same could be said about all the inhabited spaces of Iceland, where citizens come to know their nation’s legal past as an aspect of their physical environment. Indeed, this is a country in which popular legal historical consciousness is rooted in specific plots of land. As one tours the Icelandic countryside, one regularly passes sites mentioned in the sagas which have some specifically legal association and which, at the same time, are merely working farmsteads, as they often were during the saga age. Here is the farm of a great lawspeaker. There is an unusual rock formation where chieftains held court. No material artifacts remain of the ancient legal events that took place there, and in the seeming majority of cases, no signs or markers commemorate the history of the site. But what remains is a highly active folk memory of law, part of what archeologist Adolf Fri∂riksson calls popular antiquarianism. If one drives through Iceland looking merely for amazing scenery, one can find it; yet unless one works to gain a sense of what each individual place means to Icelanders, one is missing much of the point.

Here are three examples from our recent travels.

The national assembly plain at Thingvellir was not the only place where Icelanders gathered to discuss and administer their laws. The island was divided into districts, each of which had its own assembly with its own meeting site. The day before yesterday, we visited one of those sites just a few miles from the charming village of Stykkishólmur, on the western coast. The site also is called Thingvellir: the former regional assembly (thing) plain (vellir). We were especially interested in seeing a rock at the site said to be where criminals were beheaded: the Icelandic Road Atlas asserts that blood can still be seen on the stone! This Thingvellir is quite an important historical place, yet unlike the national assembly site it is not preserved or even signed for what it is—there is no historical marker there at all. It is simply a sheep farm. We found the place by driving down a long gravel road at the tip of a bucolic peninsula, finally coming upon a small, unassuming one-story house. Our knock at the door was cheerily answered by the owner’s granddaughter, who told us that she grew up with stories of what had happened at her grandmother’s home “in ancient times.” She gave us permission to wander about the farm, and she pointed out the execution stone in question, making sure that we didn’t confuse it with another rock which usually distracts the attention of visiting tourists. Here are some images of the place to give you a sense of its apparent remoteness (I say apparent, because these places may be physically remote, but they are not so in a cultural sense, though it would be easy as a foreign visitor to conflate the two): 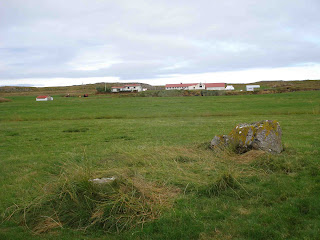 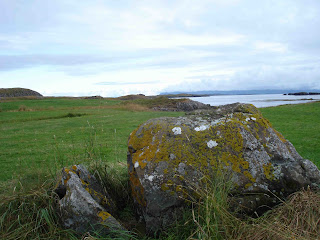 More seemingly remote still is a site we visited today in the north of the country, on the spectacular peninsula of Vatnsnes. The place is called Brei∂abólssta∂ur, and it contains a horse farm, a small, beautiful church, and a parsonage. We found it by driving about twenty miles down a narrow gravel road and then following a long, even narrower gravel driveway about half a mile toward some imposing hills. The owner of the youth hostel in which we were spending the night, which also was a working farm, described Bre∂abólssta∂ur in respectful if not reverential tones as a pilgrimage site for Icelandic lawyers, who apparently regularly travel there to picnic and commune with the spirit of one of its former residents. That resident is Hafli∂i Másson, the great lawspeaker who played a central role in producing the first written collection of Icelandic law in 1117, known as the Grágás (a link to the excellent University of Manitoba series in which it appears in English translation can be found here). A stone pillar placed at the bottom of the driveway in 1974 indicates the existence of the site, but one could very easily overlook the marker, as we did the first time, and we were looking for the farm! Otherwise, the farm and church and parsonage seem to be merely what they are, without any further historical reference. Brei∂abólssta∂ur is just a part of the landscape—and yet it is a landscape whose legal historical importance people 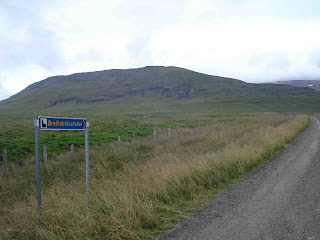 know well. Here are some pictures: 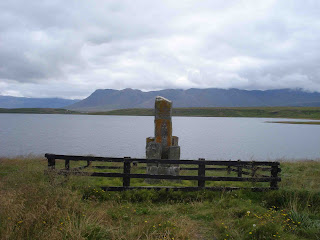 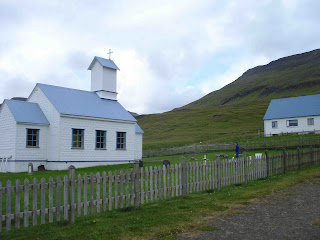 Finally, today we visited the imposing waterfalls of Go∂afoss, among the greatest waterfalls of the country. The historical significance of the falls lies plainly in their name, which means roughly “falls of the gods.” In 999/1000, Iceland peaceably converted to Christianity through a legal arbitration held at the Althing. The law of the country at the time was said to be splitting into two—in part, as suggested by Jón Jóhannesson’s great work Íslendiga Saga: A History of the Old Icelandic Commonwealth, because Christians and heathen chieftains refused to recognize the legitimacy of the investiture ceremonies of the other group, thereby creating a deep rift in the country’s legal apparatus. A compromise was reached through the leadership of the pagan lawspeaker Thorgeir, who determined that the people of the country would collectively convert to Christianity, though they could continue to engage in certain pagan practices in secret. I’ll be discussing this event more when I discuss the remains of the Bishopric of Skáholt, but for now it’s enough to say that this was a legal decision which lay the course for all of Iceland’s legal, political, and cultural history. After it was made, Thorgeir returned to his farm and threw the statutes of his pagan gods into the falls near his home—hence the name of this extraordinary natural feature. To think of an American parallel, one might return to my previous post and imagine that the Grand Canyon were named the Canyon of the Constitution or Independence Gorge. 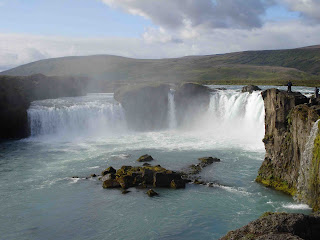 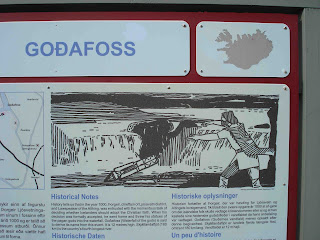 How does the intimacy of the relation between landscape and legal memory in Iceland pose a challenge to public historians and curators? And how might the economic and political future of Iceland transform that relation? And how does the future of vernacular legal historical consciousness here implicate the future of the welfare state in a consumer society—not to mention fish and, still more, international banking? Those questions will have to wait for the next post. It’s been a long day of intense driving, with more to come tomorrow.
Posted by Mary L. Dudziak at 8:35 AM