Dispatches from a Fulbright: Mark Weiner in Iceland

Mark Weiner, Professor of Law and Sidney I. Reitman Scholar, Rutgers School of Law, Newark, will be a Fulbright Fellow at the University of Akureyri, Iceland this fall. Mark will send dispatches from Iceland during his Fulbright. The first is below.

Note to occasional readers: to find future dispatches from Mark's Fulbright, check the "Iceland" label on the blog sidebar.
From Mark Weiner
August 7, 2009

I am writing from the lower deck of a gently rolling Icleandic ferry as it makes its way to the Westmann Islands, a group of small isles and skerries just off the south coast of this magnificent and troubled country. The islands are named after slaves and Irishmen—men from the west. In about 870, the Celtic servants of Hjörleifur Hró∂marsson fled there after killing their master, though in good settlement-era fashion they were later tracked and killed by Hjörleifur’s brother-in-law, Ingólfur Arnarson, the first settler of Reykjavík. The Westmanns were formed by a series of undersea volcanic eruptions, and the possibility of further eruptions still remains very much alive. In 1963 an eruption created an entirely new Westmann landmass, the isle of Surtsey, and an eruption ten years later forced the rapid evacuation of Heimaey, the island which is my destination today. We should arrive in about three hours. The rain is driving hard. 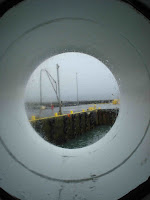 From the cabin of an Icelandic ferry …

While waves splash with increasing force against my cabin window, I send my thanks to Mary, who kindly invited me to be a guest blogger during my visit to Iceland, where I will be spending the fall semester as a Fulbright Fellow at the University of Akureyri. The city of Akureyri lies in the far north of the country, just shy of the Arctic Circle, and it is the third largest city in Iceland, with a population of about 17,000 people. During my stay, I’ll be blogging about the Fulbright program—explaining how to apply for a fellowship and what opportunities exist for legal historians—and sharing some observations about the legal history and historiography of this land I’m privileged to call home until the end of December. Before we settle in Akureyri, my wife and I will be driving the full circumference of Iceland in an old Hyundai we purchased from an outgoing Fulbrighter. Our two-week voyage should give me a chance as well to share some thoughts about Icelandic historical tourism, a good deal of which concerns events of interest to legal historians. I’d especially like to use this space to discuss popular legal-historical consciousness in Iceland and, in particular, to explore the relation between how Icelanders understand their legal past and the challenges they face as a nation today.

We have just spent the past four days in Reykjavík dealing with administrative matters (the length of our stay requires us to establish Icelandic residency), and I’m delighted to say that the whole process could not have been easier. The morning after we arrived, we walked a few miles from our modest guesthouse downtown to the directorate of immigration, a division of the Ministry of Justice and Ecclesiastical Affairs, and there we had our first experience with the pleasures—I am not joking—of Icelandic bureaucracy. The directorate was lodged in a building about the size of the administration building of a Northeast liberal arts college, and the inside had an air of tranquil efficiency. A kindly staff member processed our papers in about fifteen minutes, and after directing us on a map to the National Registry Office, she waved enthusiastically and smiled as we left. All our bureaucratic experiences have been similarly easy—indeed, I would even call them cozy. Who knew that visiting the Icelandic equivalent of the Department of Motor Vehicles could be so easy and enjoyable? “Welcome to t 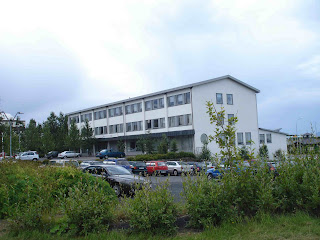 he DMV! Please sit in that sensible Ikea chair while I calmly yet efficiently take care of the business which brings you here. In the meantime, would you like a delicious cup of coffee? Espresso?” I’d like to go again next time we’re in town.

Welcome to the Directorate of Immigration.
Would you like some coffee?

At the same time, our day of trekking throughout the city also was sadly illuminating of the terrible ills besetting the country. As we snaked our way through various streets and thoroughfares foreigners don’t typically visit, what struck us most powerfully was the number of times we passed empty storefronts, desolate construction sites, and stores advertising 50%-off sales. The representative at the immigration directorate was indeed kind and efficient, but she also told us despondently that she no longer recognized her own country; a government worker railed against the cheaters and thieves and liars who have brought the nation to ruin and who should be thrown in jail; and the used cell phone we purchased still contained an ominous video file of protestors banging pots and pans in front of a raging bonfire in the center of town. This is a country living in the midst of a submarine volcanic eruption from which it cannot escape. And the crisis is one not only of economics and politics. It implicates basic issues of national identity: the crisis has caused a fundamental disorientation of the national self. The cheaters, thieves, and liars, after all, are themselves Icelanders, and many Icelanders participated in the consumer frenzy that preceded the current bust. Will the crisis also change the way Icelanders understand their national past? For more on that, in a future entry I’ll be discussing a highly stimulating conversation I had while in Reykjavík with Adolf Fri∂riksson, Chairman of the Institute of Archeology.

When we left Reykjavík, it was the first time my wife and I had driven on Icelandic roads—quite an experience. “Just pretend like you’re driving on the moon and you’ll be fine,” I told Stephanie as we gazed at vast volcanic 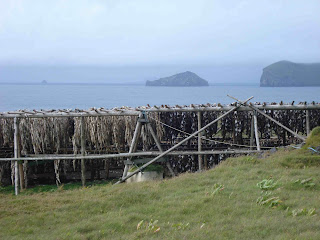 mountains and skidded along a narrow gravel road. Fortunately, we got the hang of it pretty quickly, and we expect to feel like old hands soon enough—the blog depends on it! For the moment, though, we’re quite happy to be traveling by sea. Certainly we’re looking forward to waking up in Heimaey. It seems appropriate that Heimaey should be the first stop on our journey. For one—and I write now having spent a day on the island—it is the most lucrative fishing port in all Iceland, a country where, as I believe Halldór Laxness once wrote, everything ultimately comes down to cod.


Moreover, in addition to its association with Irish servants, Heimaey has othe 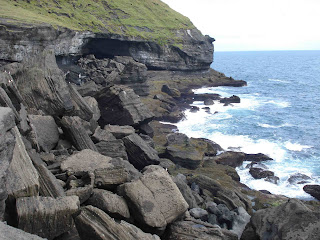 r important connections with the national past. Most notably, it was here that in the late tenth century Norwegian priests landed before setting off to the fateful meeting of the Althing at which Icelanders peaceably converted to Christianity in the course of a momentous legal arbitration—described powerfully in Njal’s Saga. In addition, as Stephanie and I learned on a wind-swept ten-mile hike today, Heimaey was the site of a raid in 1627 by Algerian pirates, who landed in this cove

and, ransacking the island, took about two-hundred Icelanders captive for the slave trade. The event is commemorated on the doorway to the main church in town: 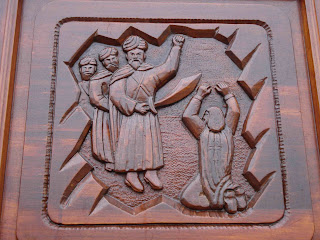 The past and the present; slaves and masters. I’m glad to start this blog in a place rich in pertinent metaphors for thinking the relation between the Icelandic present and its past: the past being dependent on the present just as, pace Hegel, a master ultimately is the servant of his slave. But about that connection, and about the fascinating complexities of Icleandic legal historical consciousness, more later. As the Icelanders say, Vi∂ sjáumst!
Posted by Mary L. Dudziak at 1:45 AM