Elizabeth Dale, University of Florida, is in the enviable position of having two books published this fall!  The first is here.  The second is a lively read -- criminal law history as a mystery:  The Chicago Trunk Murder: Law and Justice at the Turn of the Century.  Here's the book description: 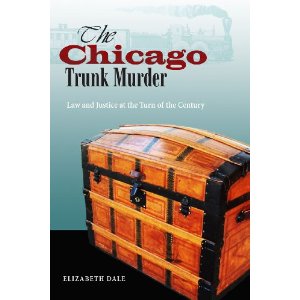 On November 14, 1885, a cold autumn day in the City of Broad Shoulders, an enthusiastic crowd of several hundred watched as three Sicilians Giovanni Azari, Agostino Gelardi, and Ignazio Silvestri were hanged in the courtyard of the Cook County Jail. The three had only recently come to the city, but not long after they were arrested, tried, and convicted for murdering Filippo Caruso, stuffing his body into a trunk, and shipping it to Pittsburgh.

Historian and legal expert Elizabeth Dale brings the Trunk Murder case vividly back to life, painting an indelible portrait of nineteenth-century Chicago, ethnic life there, and a murder trial gone seriously awry. Along the way she reveals a Windy City teeming with street peddlers, crooked cops, earnest reformers, and legal activists—all of whom play a part in this gripping tale. Chicago’s Trunk Murder shows how the defendants in the case were arrested on dubious evidence and held, some for weeks, without access to lawyers or friends. The accused finally confessed after being interrogated repeatedly by men who did not speak their language. They were then tried before a judge who had his own view and ruled accordingly. Chicago’s Trunk Murder revisits these abject breaches of justice and uses them to consider much larger problems in late nineteenth century criminal law. Written with a storyteller’s flair for narrative and brimming with historical detail, this book will be must reading for true crime buffs and aficionados of Chicago lore alike.


“Chicago’s Trunk Murder is a valuable reconstruction of an 1880s Chicago murder trial. The author’s exhaustive primary research in court records,newspapers, and geneaological records and thorough mining of the relevant secondary literature create a fascinating portrait of the dynamics of anti-immigrant prejudice and ‘common sense justice’ (as opposed to a concern for due process) underlying a criminal trial in an emerging gilded Age American metropolis.”
—Michael J. Pfeifer, John Jay College of Criminal Justice, City University of New York