Over at the Nation, Martha Nussbaum reviews Great Soul: Mahatma Gandhi and His Struggle With India (Knopf), by Joseph Lelyveld. Here's a taste:


The strength of Great Soul is its detailed coverage of the evolution of Gandhi’s views about political activism, caste and race during his stay in South Africa. Although Gandhi worked there for twenty-one years, returning to India at age 44, his life there hasn’t been as closely chronicled as his later years in India. Lelyveld underscores its importance, explaining how through work on a constellation of political and ethnic issues Gandhi developed the combination of intense spirituality and canny pragmatism he later used so effectively as a political leader in India.

Nussbaum also discusses the furor that the book has caused among the Hindu right. The full review is here. (We noted an earlier review, from the New York Review of Books, here.)

Also in the pages of the Nation, a review of The Lost Children: Reconstructing Europe’s Families After World War II (Harvard University Press), by Tara Zahra.  In Zahra's words, orphaned and unaccompanied children held “a special grip on the postwar imagination.”  They also, reviewer Holly Case adds, "embodied an uncomfortable relationship with the past": "Finding a home for these children after the war required obliterating or making some sense of their tangled origins and of the wartime experience itself. Most Europeans were ill prepared for the task."


Stevens' memoir is not a source of court gossip or even deep insight into its inner workings. Laced with observations on the court's architecture, traditions and even its seating arrangements, it is rather the collected ruminations of a man who has served his country in war and peace, across the decades. . . . He is a national treasure.

The New York Times Sunday Book Review gives top billing to The Magnificent Medills: America’s Royal Family of Journalism During a Century of Turbulent Splendor (Harper/HarperCollins), by Megan McKinney, and Newspaper Titan: The Infamous Life and Monumental Times of Cissy Patterson (Knopf), by Amanda Smith.  (We mentioned an earlier Washington Post review of both books here).  Together, the books "expend more than 1,000 pages chronicling the escapades of Joseph Medill and his family." The pay-off remains unclear:


Contra McKinney, the Medills were not magnificent but neurotic, alcoholic, megalomaniac and inordinately unpleasant generally. Far from being a titan, of newspapers or anything else, Cissy Patterson was, in Smith’s own showing, capricious, spoiled, headstrong, snobbish, litigious, anti-­Semitic, a mean drunk and vindictive. Not, as we should say today, a fun family . . . .

A new issue of the London Review of Books is out. Enjoy open access to Joanna Biggs's essay on legal aid ("Who will get legal aid now?") and Jeremy Harding's discussion of the war on America's southern border ("The Deaths Map").  Subscribers may read David Bell's review of Common Sense: A Political History (Harvard University Press), by Sophia Rosenfeld , and Adam Phillips's review of Adventures in the Orgasmatron: Wilhelm Reich and the Invention of Sex (Fourth Estate), by Christopher Turner .

The featured review over at the New Republic is of The Gaze of the Gazelle: The Story of a Generation (Seagull Books), by Arash Hejazi. According to the review, "[t]his book is a story of failure—the failure of the Islamic Republic, despite thirty years of propaganda and political education, to inculcate in a new generation of Iranians faith in the ideology of the regime." 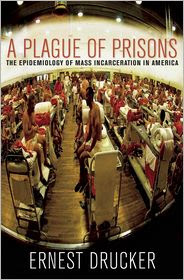 In the book pages of the Washington Post, Michelle Alexander reviews A Plague of Prisons: The Epidemiology of Mass Incarceration in America (New Press), by public health scholar and physician Ernest Drucker, and The Collapse of American Criminal Justice (Belknap Press), by the late Harvard Law professor William J. Stuntz.  "Missing from both [these] analyses," Alexander argues, "is a deeper understanding of how race has operated: much like a virus, infecting the belief systems and attitudes of people of all colors and mutating into new institutional forms."