Tirres Reviews Brilliant, "The Color of America Has Changed" 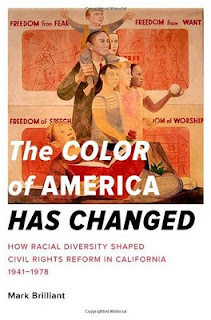 Writing for JOTWELL, Alison Tirres (DePaul University) has reviewed The Color of America Has Changed: How Racial Diversity Shaped Civil Rights Reform in California, 1941-1978 (Oxford University), by Mark Brilliant (University of California, Berkeley). The review is titled "Is Alabama the New California? Civil Rights History Through a Multiracial Lens." Here's the start:


Recently, thousands of people participated in the forty-seventh anniversary of the historic 1965 marches from Selma to Montgomery.  Now, as in 1965, voting rights were front and center: marchers protested against the recent passage of restrictive voting laws in many states, arguing that such provisions disproportionately disenfranchise voters of color.  This was familiar ground for civil rights organizers in the South.  This year, however, there was a new theme: immigrant rights.  Those marching joined in opposition to Alabama’s H.B. 56, which targets undocumented immigrants in the state.  The tone, as recounted by Trymaine Lee for the Huffington Post, was one of solidarity: marchers commented on the shared struggle and shared aims of those of African, Asian and Latin American descent, of citizens and non-citizens.

Alabama is in a new phase of its own civil rights history, but this multiracial rights frontier itself is not new.  The deep South now grapples with issues of inter-group coalition building that were at the forefront in California more than a half-century ago.  In his impressive new book, The Color of America Has Changed: How Racial Diversity Shaped Civil Rights Reform in California, 1941-1978, Mark Brilliant demonstrates that California experienced the challenges and rewards of “multiracial civil rights making” starting in the 1940s. (p. 12.)

Regular readers will recall that we mentioned the book (here) last fall, when it won the annual book prize from the William Nelson Cromwell Foundation.
Posted by Karen Tani at 2:00 PM