Out from the Carolina Academic Press next month, but available for preorder now, is The Birth of American Law: An Italian Philosopher and the American Revolution, by John D. Bessler, University of Baltimore School of Law.  The press explains that it 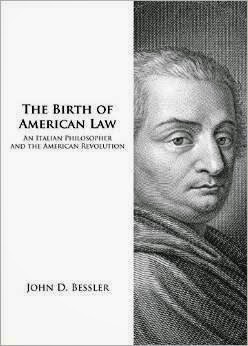 tells the forgotten, untold story of the origins of U.S. law. Before the Revolutionary War, a 26-year-old Italian thinker, Cesare Beccaria, published On Crimes and Punishments, a runaway bestseller that shaped the Declaration of Independence, the U.S. Constitution, and early American laws. America's Founding Fathers, including early U.S. Presidents, avidly read Beccaria's book—a product of the Italian Enlightenment that argued against tyranny and the death penalty. Beccaria's book shaped American views on everything from free speech to republicanism, to ''Life, Liberty and the pursuit of Happiness,'' to gun ownership and the founders' understanding of ''cruel and unusual punishments,'' the famous phrase in the U.S. Constitution's Eighth Amendment. In opposing torture and infamy, Beccaria inspired America's founders to jettison England's Bloody Code, heavily reliant on executions and corporal punishments, and to adopt the penitentiary system.

The cast of characters in The Birth of American Law includes the usual suspects—George Washington, Thomas Jefferson, John Adams and James Madison. But it also includes the now little-remembered Count Luigi Castiglioni, a botanist from Milan who—decades before Alexis de Tocqueville's Democracy in America—toured all thirteen original American states before the 1787 Constitutional Convention in Philadelphia. Also figuring in this dramatic story of the American Revolution: Madison's Princeton classmate William Bradford, an early U.S. Attorney General and Beccaria devotee; John Dickinson, the ''Penman of the Revolution'' who wrote of Beccaria's ''genius'' and ''masterly hand''; James Wilson and Dr. Benjamin Rush, signers of the Declaration of Independence and fellow Beccaria admirers; and Philip Mazzei, Jefferson's Italian-American neighbor at Monticello and yet another Beccaria enthusiast. In documenting Beccaria's game-changing influence, The Birth of American Law sheds important new light on the Constitution, the Bill of Rights, and the creation of American law.