Yesterday we mentioned Peter Graham Fish’s Federal Justice in the Mid-Atlantic South: United States Courts from Maryland to the Carolinas, 1836–1861 (Carolina Academic Press, 2015) in an update on historical societies of the federal courts, but it deserves a post of its own: 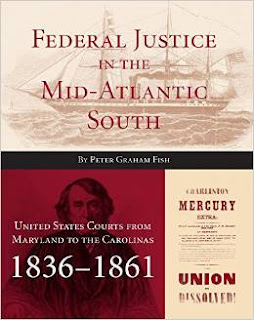 This sweeping exploration in eight richly illustrated parts meticulously traces the antebellum development and performance of the federal judiciary across five judicial districts and, until 1842, three separate circuits within the bounds of the modern but historic U. S. Fourth Circuit (Maryland, Virginia-West Virginia, and the Carolinas). A variety of sources, data, and approaches are used to explain the politics of circuit and court organization as well as the selection and disparate compensation of the district judges, court workloads, and administration.

Emphasis is placed on the roles played by the judges, including the circuit-riding Supreme Court justices, primarily James M. Wayne and Roger B. Taney, as well as advocates at the bar and grand juries in construing the constitutional powers and limits on the judiciary (i.e. ''brown water'' admiralty jurisdiction), Congress (i.e. international slave trade), and the executive branch (i.e. executive officers). Their decisions defined nation-state relations in a sometimes benign and sometimes confrontational states-centric polity, shepherding economic life in adjudicating litigation involving patents, diverse maritime interests including those of maritime labor, bankruptcy, transportation in the waning Age of Sail and the inception of steam power technology, contracts and conveyances, and a limited range of social control subjects from murder and mail robbery to the Atlantic slave trade and fugitive slaves.

Part 8 treats the twilight days of the Old Republic in each of the five judicial districts wherein the judges and court personnel faced hard choices for some and easy choices for others amid cascading political events heralding America's greatest constitutional crisis.