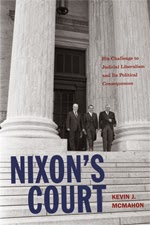 [We're moving this up. as Professor McMahon's lecture may now be viewed on C-SPAN.]

Thanks to the usual competence and efficiency of the Supreme Court Historical Society, Kevin J. McMahon’s Erwin Griswold Prize Lecture on Nixon’s Court: His Challenge to Judicial Liberalism and Its Consequences, went off well last night.  The audience and the official host—Justice Antonin Scalia–did have to negotiate Professor McMahon’s reading of a passage in which Nixon, caught on tape, sized up the political benefits of appointing an Italian American to the Court, but Justice Scalia did his part by being warm and gracious.  His observation that “his dean”–Dean Griswold–was incapable of small talk confirmed Griswold’s own belief that he was not selected legal secretary to Justice Oliver Wendell Holmes “because I was not the ‘polished gentleman’ who was usually chosen for the post.”

The prize was created by Jones Day in 1995 to honor Griswold, who joined the firm's Washington office after his Solicitor Generalship.  Among the firm’s lawyers in attendance was Kevyn Orr, whose recent service as Detroit’s emergency manager was acknowledged.  The unexpected juxtaposition of Mister Orr and President Nixon prompted reflections on how the wielding of enormous discretionary power can bring out the best in some lawyers and the worst in others.

The lecture by McMahon, the John R. Reitemeyer Professor of Political Science at Trinity College, will be broadcast on C-Span and available online, in due course.
Posted by Dan Ernst at 1:00 PM