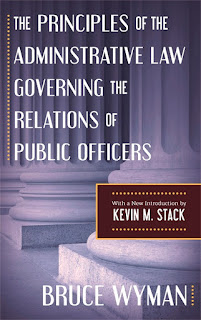 This introductory essay, included in a republication of Bruce Wyman’s treatise on administrative law, The Principles of the Administrative Law Governing the Relations of Public Officers (1903, republished with new introduction, 2014), describes Wyman’s vision of administrative law and examines the treatise’s uneasy relationship with the dominant intellectual currents of his day. Wyman’s treatise provides the first development in American legal thought of the idea that the primary grounds of administrative legality are the internal practices and procedures that agencies adopt to structure their own exercise of discretion, "the internal administrative law," as opposed to the standards and types of judicial review, "the external law of administration." Wyman’s treatise thus serves as a fount for the rekindled project of understanding the forms and roles of internal administrative law. The treatise contains many other insights that resonate in current debates; we can read Wyman, writing a mere three years after his graduation from and subsequent appointment to the faculty of Harvard Law School, as prescient in his understanding of the grounds and role of delegation to agencies and judicial deference to their decisions. Wyman’s treatise also covers topics falling within the law of enforcement, such as police investigations and foreign affairs, prompting contemporary readers to consider what has been lost from the isolation of these areas from the cognizance of administrative law.