Charles W. Romney, University of Arkansas-Little Rock, has just published Rights Delayed: The American State and the Defeat of Progressive Unions, 1935-1950, with the Oxford University Press: 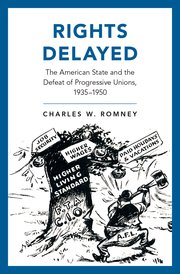 Progressive unions flourished in the 1930s by working alongside federal agencies created during the New Deal. Yet in 1950, few progressive unions remained. Why? Most scholars point to domestic anti-communism and southern conservatives in Congress as the forces that diminished the New Deal state, eliminated progressive unions, and destroyed the radical potential of American liberalism. Rights Delayed: The American State and the Defeat of Progressive Unions argues that anti-communism and Congressional conservatism merely intensified the main reason for the decline of progressive unions: the New Deal state's focus on legal procedure. Initially, progressive unions thrived by embracing the procedural culture of New Deal agencies and the wartime American state. Between 1935 and 1945, unions mastered the complex rules of the NLRB and other federal entities by working with government officials. In 1946 and 1947, however, the emphasis on legal procedure made the federal state too slow to combat potentially illegal cooperation between employers and the Teamsters. Workers who supported progressive unions rallied around procedural language to stop what they considered Teamster collusion, but found themselves dependent on an ineffective federal state. The state became even less able to protect employees belonging to left-led unions after the Taft-Hartley Act's anti-communist provisions-and decisions by union leaders-limited access to the NLRB's procedures. From 1946 until 1950, progressive unions withered and eventually disappeared from the Pacific canneries as the unions failed to pay the cost of legal representation before the NLRB. Workers supporting progressive unions had embraced procedural language to claim their rights, but by 1950, those workers discovered that their rights had vanished in an endless legal discourse.


Deeply researched, forcefully argued, and clearly written, Rights Delayed recovers little-known connections between the New Deal state and a wide range of legal procedures, social phenomena, and economic actors.  While many labor historians will dislike Romney's concussions--because compromises, mistakes, and the preferences of union personnel contributed to the demise of progressive unionism--Rights Delayed offers an interpretation that they all must reckon with.
---Bruce J. Schulman, William Huntington Professor of History, Boston University

Told from the vantage of workers, organizers, and lawyers, Rights Delayed demonstrates that progressive unionists could not outlast their rivals and opponents as they sparred within the peculiarly procedural American state.  Historians have long debated what the New Deal did for and to workers; now Romney shows us the consequences for the men and women who hoped to transform the American workplace.
--Daniel R. Ernst, Professor of Law, Georgetown University Law Center, and author of Tocqueville's Nightmare   [Hey, that's me!]