Out this month from OUP is University, Court, and Slave: Pro-Slavery Thought in Southern Colleges and Courts and the Coming of Civil War, by Alfred L. Brophy, University of North Carolina School of Law: 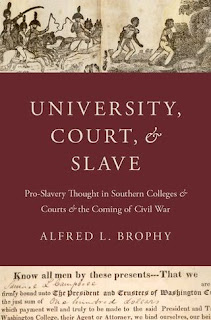 University, Court, and Slave reveals long-forgotten connections between pre-Civil War southern universities and slavery. Universities and their faculty owned people-sometimes dozens of people-and profited from their labor while many slaves endured physical abuse on campuses. The profits of enslaved labor helped pay for education, and faculty and students at times actively promoted the institution. They wrote about the history of slavery, argued for its central role in the southern economy, and developed a political theory that justified slavery. The university faculty spoke a common language of economic utility, history, and philosophy with those who made the laws for the southern states. Their extensive writing promoting slavery helps us understand how southern politicians and judges thought about the practice.

As Alfred L. Brophy shows, southern universities fought the emancipation movement for economic reasons, but used history, philosophy, and law in an attempt to justify their position. Indeed, as the antislavery movement gained momentum, southern academics and their allies in the courts became bolder in their claims. Some went so far as to say that slavery was supported by natural law. The combination of economic reasoning and historical precedent helped shape a southern, proslavery jurisprudence. Following Lincoln's November 1860 election, southern academics joined politicians, judges, lawyers, and other leaders in arguing that their economy and society was threatened. Southern jurisprudence led them to believe that any threats to slavery and property justified secession.

Bolstered by the courts, academics took their case to the southern public-and ultimately to the battlefield-to defend slavery. A path-breaking and deeply researched history of southern universities' investment in and defense of slavery, University, Court, and Slave will fundamentally transform our understanding of the institutional foundations of pro-slavery thought.

Professor Brophy discusses his book here.  TOC here; endorsements after the jump.
"The labor lords of the antebellum American South did not just engage in a war of maneuver, but also in a war of position. Violence and brute force allowed them to dominate their workers, but, as Al Brophy shows in this fascinating study, so was the development of an ideological and legal edifice that justified the persistence of slavery in the American republic. To understand slavery, argues Brophy, we need to not just think of the lash, the overseer and the plantation, but also the law, the courts and southern universities. Sophisticated lawyers, smart professors and passionate ideologues enabled unfathomable repression to descend upon millions of enslaved Americans."-Sven Beckert, Laird Bell Professor of History, Harvard University and author of Empire of Cotton: A Global History

"In this deeply researched, beautifully written book, Alfred Brophy recreates the world of pro-slavery academics and jurists and their literary critics-north and south, well-known and largely forgotten. This important volume reinforces the pervasiveness of pro-slavery thought in the nineteenth-century United States, and reinvigorates our understanding of the intellectual and cultural histories and legacies of the slavery era in our legal system."-Leslie M. Harris, Professor of History, Northwestern University and author of In the Shadow of Slavery: African Americans in New York City, 1626-1863

"A learned treatise about learned treatises, University, Court, and Slave introduces readers to the professors and jurists who sustained American slavery. Reaching far beyond the standard intellectual histories of pro-slavery thought, Brophy recovers the potent interplay of slaveholding jurisprudence and university curricula in protecting property rights in people and shaping the nature of liberal market society in the nation as a whole. This is a major accomplishment and a significant contribution to the revitalized study of slavery and capitalism."-Seth Rockman, Associate Professor of History, Brown University and co-editor of Slavery's Capitalism: A New History of American Economic Development
Posted by Dan Ernst at 12:30 AM