Rose, "Authors in Court: Scenes from the Theater of Copyright"

New from Harvard University Press: Authors in Court: Scenes from the Theater of Copyright (June 2016), by Mark Rose (University of California, Santa Barbara). A description from the Press: 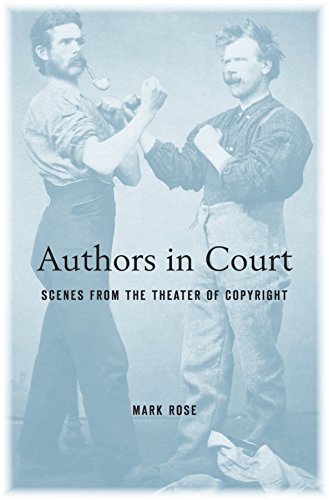 Through a series of vivid case studies, Authors in Court charts the 300-year-long dance between authorship and copyright that has shaped each institution’s response to changing social norms of identity, privacy, and celebrity. Authors’ self-presentations in court are often inflected by prevailing concepts of propriety and respectability. And judges, for their part, have not been immune to the reputation and standing of the authors who have appeared before them in legal dramas.

Some authors strut their roles on the public stage. For example, Napoleon Sarony—the nineteenth-century photographer whose case established that photographs might be protected as works of art—was fond of marching along Broadway dressed in a red fez and high-top campaign boots, proclaiming his special status as a celebrity. Others, such as the reclusive J. D. Salinger, enacted their dramas precisely by shrinking from attention. Mark Rose’s case studies include the flamboyant early modern writer Daniel Defoe; the self-consciously genteel poet Alexander Pope; the nineteenth-century abolitionist Harriet Beecher Stowe; the once-celebrated early twentieth-century dramatist Anne Nichols, author of Abie’s Irish Rose; and the provocative contemporary artist Jeff Koons.


“A literary historian by training, Rose is completely at home in the world of law, as well as the history of photography and art. This is the work of an interdisciplinary scholar at the height of his powers. The arguments are sophisticated and the elegant text is a work of real craftsmanship. It is superb.”—Lionel Bently

“Authors in Court is well-written, erudite, informative, and engaging throughout. As the chapters go along, we see the way that personalities inflect the supposedly impartial law; we see the role of gender in authorial self-fashioning; we see some of the fault lines which produce litigation; and we get a nice history of the evolution of the fair use doctrine. This is a book that should at least be on reserve for any IP–related course. Going forward, no one writing about any of the cases Rose discusses can afford to ignore his contribution.”—Lewis Hyde