New from Springer is Bronislaw Malinowski’s Concept of Law, edited by Mateusz Stępięń, Department of Sociology of Law, Jagiellonian University, Krakow, Poland.  Professor Stępięń writes that this essay collection "began to take shape at a workshop: Malinowski’s Concept of Law from the Native’s Point of View, organized in Cracow by Jagiellonian University (on 12–13th September 2014) as an initiative to start a substantial debate on Malinowski’s forgotten legal concepts. The event commemorated the 130th anniversary of his birth." From his preface: 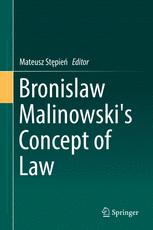 Bronislaw Malinowski is undoubtedly one of the titans of modern social sciences. It is impossible to underestimate his impact on a number of disciplines beyond social anthropology, including linguistics, religion, sociology or Cultural Studies, to name a few. Scientific legacy of Malinowski was mostly well-preserved and documented, as well as widely discussed—his works of magic, language, kinship, family, or religion became the subject of numerous studies. Moreover, his meta-conceptions (e.g. functionalism, cultural determinism) strongly influenced the debates on the way of practicing social science and mutual relationship between culture and biology. In broader terms, the importance of Malinowski’s ideas exceeds the scope of social anthropology and it constitutes a part of the common heritage of social sciences.

Against this background, it is astonishing how little attention was paid to Malinowski’s legal conceptions. . . .

TOC after the jump.
1  Not So Long Time Ago Before Malinowski: The Puzzle of Lotar Dargun’s Influence on Bronislaw Malinowski, by Michał Dudek

4  Bronislaw Malinowski and the Anthropology of Law, by Tomáš Ledvinka

5  Reciprocity as a Species of Fairness: Completing Malinowski’s Theory of Law, by James M. Donovan
Posted by Dan Ernst at 9:30 AM