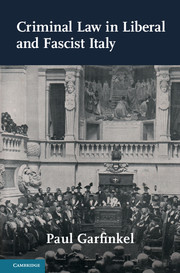 By extending the chronological parameters of existing scholarship, and by focusing on legal experts' overriding and enduring concern with 'dangerous' forms of common crime, this study offers a major reinterpretation of criminal-law reform and legal culture in Italy from the Liberal (1861–1922) to the Fascist era (1922–43). Garfinkel argues that scholars have long overstated the influence of positivist criminology on Italian legal culture and that the kingdom's penal-reform movement was driven not by the radical criminological theories of Cesare Lombroso, but instead by a growing body of statistics and legal researches that related rising rates of crime to the instability of the Italian state. Drawing on a vast array of archival, legal and official sources, the author explains the sustained and wide-ranging interest in penal-law reform that defined this era in Italian legal history while analyzing the philosophical underpinnings of that reform and its relationship to contemporary penal-reform movements abroad.


"Professor Garfinkel's book is one of those rare works of original scholarship that succeeds in covering both the Liberal and Fascist eras in Italian history at the national level. By concentrating on common crime rather than political crimes, he has developed an extremely original thesis that challenges the established interpretations of jurisprudence in the nineteenth and twentieth centuries." Anthony Cardoza, Loyola University, Chicago

"Paul Garfinkel's vivid account of the development of Italian criminal justice from the perspective of prominent criminal law practitioners relies on a stunning array of sources to craft a convincing argument. An insightful contribution to the study of European law and society, the book offers an important counterpoint to prevailing historiography." Maura Hametz, Old Dominion University, Virginia

"Eloquently written, and with a welcome focus on the treatment of ordinary rather than political crime, Garfinkel's ground-breaking book persuasively challenges scholarly understandings of the ideas and debates inspiring penal reform in Liberal Italy and the first decade of Mussolini's fascist regime." Jonathan Dunnage, Swansea University

"This elegantly written and widely researched study of criminal law in liberal and fascist Italy challenges the widely accepted view that Italy's 1930 criminal law code was fascist, positivist and anti-liberal in inspiration. Engaging with the wider debates on the relationship between liberalism and fascism, Paul Garfinkel's conclusions will attract the attention of scholars in many different fields." John Davis, University of Connecticut