Scheiber, ed.: New Volume on the History of the California Supreme Court 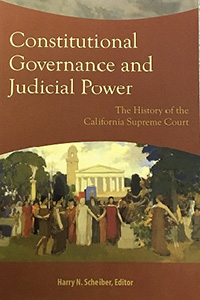 Constitutional Governance and Judicial Power tells the story of the Court, from its founding at the dawn of statehood to modern-day rulings on issues such as technology, privacy, and immigrant rights. In this comprehensive history, we see the Court’s pioneering rulings on the status of women, constitutional guarantees regarding law enforcement, the environment, civil rights and desegregation, affirmative action, and tort liability law reform. Here too are the swings in the Court’s center of gravity, from periods of staunch conservatism to others of vigorous reform. And here is the detailed history of an extraordinary political controversy centered on the death penalty and Chief Justice Rose Bird. California has led the way in many varied aspects of American life, including the law. Constitutional Governance and Judicial Power gathers the many strands of legal history that make up the amazing story of the California Supreme Court.

A list of contributors is available here, alongside advance reviews by Gerald Uelman and the late Kevin Starr, among others.
Posted by Karen Tani at 12:30 AM