Our friends at Penn Law, including especially Sophia Z. Lee, have organized an excellent symposium, The History, Theory, and Practice of Administrative Constitutionalism, to be held at the law school on October 19-20, 2018.  Here's its premise: 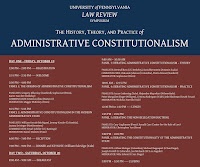 The United States today faces contentious debates over the constitutionality of federal administrative action. These debates gained steam during the Obama presidency, as congressional gridlock led the President to rely heavily on administrative agencies to advance an ambitious and controversial policy agenda. Across the political spectrum lawyers and politicians charged these agencies with violating individual constitutional rights (such as religious freedom and procedural due process) and structural constitutional constraints (such as the President’s constitutional obligation to faithfully execute the laws). The Trump White House has followed in its predecessor’s footsteps, leading to similar challenges to his administration’s changes to immigration, environmental, educational, and anti-discrimination policy.

Lurking behind these legal arguments is a bi-partisan anxiety about the constitutional status of the administrative state as a whole: the tangled web of agencies responsible for the vast majority of what the federal government does on a day-to-day basis. Despite their enormous power, federal agencies are barely mentioned in the Constitution’s text. Yet they play a central role in the everyday interpretation and implementation of constitutional law. For instance, it was administrators who first struck the balance between the religious rights of employers and the statutory rights to access cost-free contraceptives of their female employees. It is administrators as well who are crafting the Trump administration’s broad interpretations of religious liberty. As these examples suggest, it will often fall to administrative officials far from the public eye to resolve constitutional conflicts caused by a particular law, or to push the boundaries of the law in a constitutionally innovative direction.

Update: The image is a more recent version of the schedule.
Posted by Dan Ernst at 9:30 AM