Salyer's "Under the Starry Flag"

It’s out!  Lucy E. Salyer, University of New Hampshire, has published Under the Starry FlagHow a Band of Irish Americans Joined the Fenian Revolt and Sparked a Crisis over Citizenship (Harvard University Press): 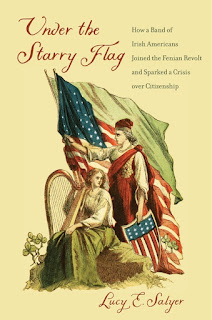 The riveting story of forty Irish Americans who set off to fight for Irish independence, only to be arrested by Queen Victoria’s authorities and accused of treason: a tale of idealism and justice with profound implications for future conceptions of citizenship and immigration.

In 1867 forty Irish American freedom fighters, outfitted with guns and ammunition, sailed to Ireland to join the effort to end British rule. Yet they never got a chance to fight. British authorities arrested them for treason as soon as they landed, sparking an international conflict that dragged the United States and Britain to the brink of war. Under the Starry Flag recounts this gripping legal saga, a prelude to today’s immigration battles.

The Fenians, as the freedom fighters were called, claimed American citizenship. British authorities disagreed, insisting that naturalized Irish Americans remained British subjects. Following in the wake of the Civil War, the Fenian crisis dramatized anew the idea of citizenship as an inalienable right, as natural as freedom of speech and religion. The captivating trial of these men illustrated the stakes of extending those rights to arrivals from far-flung lands. The case of the Fenians, Lucy E. Salyer shows, led to landmark treaties and laws acknowledging the right of exit. The U.S. Congress passed the Expatriation Act of 1868, which guarantees the right to renounce one’s citizenship, in the same month it granted citizenship to former American slaves.

The small ruckus created by these impassioned Irish Americans provoked a human rights revolution that is not, even now, fully realized. Placing Reconstruction-era debates over citizenship within a global context, Under the Starry Flag raises important questions about citizenship and immigration.

“Under the Starry Flag is a brilliant piece of historical writing as well as a real page-turner. Salyer seamlessly integrates analysis of big, complicated historical questions—allegiance, naturalization, citizenship, politics, diplomacy, race, and gender—into a gripping narrative.”—Kevin Kenny, author of The American Irish: A History

“Salyer offers a compelling account of how the right of expatriation won recognition during the second half of the nineteenth century through the efforts of immigrants themselves, and then gestures at the darker story of how the U.S. government wielded expatriation against both native-born and naturalized citizens in the twentieth century, often to devastating effect.”—Kunal Parker, author of Making Foreigners: Immigration and Citizenship Law in America, 1600–2000

“Under the Starry Flag is a beautifully written account of the Irish Americans who fought for Ireland’s freedom in the 1860s and for their protection, as naturalized U.S. citizens, from British prosecution. Irish freedom fighters, the Civil War and slave emancipation, the color line in American law, and international relations—all told by Lucy Salyer with elegance, drama, and erudition.”—Mae Ngai, author of Impossible Subjects: Illegal Aliens and the Making of Modern America

“Beautifully crafted and compelling, Lucy Salyer’s illuminating narrative of Irish American freedom fighters is a reminder of the pathos and passion in the history of citizenship. Highly recommended.”—Mary Dudziak, author of War Time: An Idea, Its History, Its Consequences
“Do individuals have an inherent right to change their national allegiance? Are naturalized citizens the equal of birthright citizens? What power do sovereign states wield in a world of nation-states? Salyer gives us a history of expatriation in the era of Reconstruction that is both a riveting story and a brilliant contribution to our understanding of citizenship.”—Barbara Young Welke, author of Law and the Borders of Belonging in the Long Nineteenth Century United States
Posted by ernst at 12:30 AM