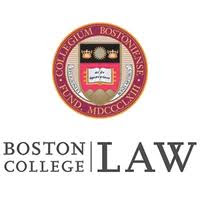 We are very pleased to announce the Spring 2019 line up at the Boston College Legal History Roundtable.  As an announcement explains: For “over 17 years, the Roundtable has drawn on BC Law's strength and interest in legal history. It offers an opportunity for Boston College faculty and faculty from other area institutions, students, and members of the Boston College community to meet and discuss a pre-circulated paper in legal history, and seeks to promote an informal, collegial atmosphere of informed discussion.

William P. Sullivan is the Raoul Berger-Mark DeWolfe Howe Legal History Fellow for 2018-2019. A graduate of Princeton and Yale Law School, he is a PhD candidate in the departments of classics and history at the University of Chicago, where his dissertation is entitled, “Relevance in the Civil Law Tradition: The Emergence of the Roman-Canon Law of Positions.” He was a Legal History Fellow at Yale Law School in 2016-2017 and a law clerk for Judge José A. Cabranes of the United States Court of Appeals for the Second Circuit in 2017-2018. His interests are in European legal history, Roman law, and comparative law.

“Executive Power, Officer Indemnity, and A Government of Laws, Not of Men: A Re-Reading of The Charming Betsy and Little v. Barreme”

Jane Manners, Bernard and Irene Schwartz Fellow, New-York Historical Society
Jane Manners studies US legal history, with a focus on American legal institutions, legislation, federalism, and local government law. During the 2018-19 academic year she is a Bernard and Irene Schwartz Fellow at the New-York Historical Society. She received her PhD in history from Princeton in 2018 and her JD and BA from Harvard. Her work has been supported by the American Council on Learned Societies, the American Society for Legal History, the American Historical Association, and the Hurst Institute at the University of Wisconsin Law School. In 2010, Jane was a law clerk for Chief Judge Mark L. Wolf of the United States District Court for the District of Massachusetts.

Logan Sawyer is an Associate Professor of Law and Adjunct Professor of History at the University of Georgia. He earned his JD and PhD from the University of Virginia and is visiting at Harvard Law School this Spring semester. Before he began teaching, Sawyer served at the White House as associate counsel for the Homeland Security Council and as a trial attorney at the Department of Justice Office of Consumer Litigation. His academic interests focus on the relationship between law and political institutions in American history. He is currently at work on a history of originalism and party politics from the 1950s to the 1990s.
Posted by Dan Ernst at 12:30 AM