Schabas's "Trial of the Kaiser"

William A. Schabas, professor of international law at Middlesex University in London, has published The Trial of the Kaiser (Oxford University Press): 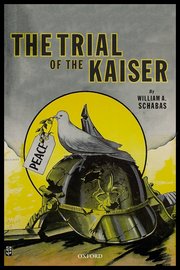 In the immediate aftermath of the armistice that ended the First World War, the Allied nations of Britain, France, and Italy agreed to put the fallen German Emperor Kaiser Wilhelm II on trial, in what would be the first ever international criminal tribunal. In Britain, Lloyd George campaigned for re-election on the slogan 'hang the Kaiser', but the Italians had only lukewarm support for a trial, and there was outright resistance from the United States.

During the Peace Conference, international lawyers gathered for the first time to debate international criminal justice. They recommended trial of the Kaiser by an international tribunal for war crimes, and the Americans relented, agreeing to a trial for a 'supreme offence against international morality'. However, the Kaiser had fled to the Netherlands where he obtained asylum, and though the Allies threatened a range of measures if the former Emperor was not surrendered, the Dutch refused and the demands were dropped in March 1920.

This book, from renowned legal scholar William A. Schabas, sheds light on perhaps the most important international trial that never was. Schabas draws on numerous primary sources hitherto unexamined in published work, including transcripts which vividly illuminate this period of international law making. As such, he has written a book which constitutes a history of the very beginnings of international criminal justice, a history which has never before been fully told.