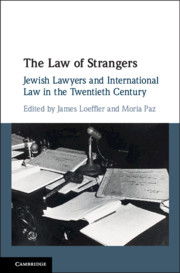 What, if anything, did Judaism or Jewishness have to do with the involvement of so many Jews in constitutional and human rights lawyering during the course of the twentieth century? How did defending the rights of racial others and other outsiders become a kind of Jewish calling? And how did Jewish human rights advocates manage the tensions that arose over the course of the century between what Samuel Moyn calls the “twin goals” of defending minority rights over against empires and nation states that flouted them, and defending Jewish claims to national self-determination via a Jewish state in Palestine? Written for a volume on The Law of Strangers: Jewish Lawyers and International Law in the Twentieth Century, this essay addresses these questions in the context of a commentary on what Moyn calls Louis Henkin’s “self-reinvention” in the 1970s as “the leading American legal advocate of human rights.” The essay situates Henkin in a long tradition of American Jewish legal liberals, going back to the late nineteenth century.

The first Jewish civil rights lawyers were well-heeled Reform Jews in the 1890s-1900s. The standard account of their self-invention as rights advocates runs along instrumental lines: Fighting Jim Crow was a “displaced” way to address the threat that Jews, like African-Americans and Asians, might be legally cast as racial others. That’s true, but there is more to it. Nineteenth-century Reform Judaism involved reinventing Judaism itself, to outfit Jews for membership in the liberal state. On this new account, Judaism was no longer a system of laws, no longer a public, corporate separateness, and it no longer named a race or a nation. It was a “private faith,” just like Protestantism. The public-facing aspect of Jewishness was subsumed in being a citizen — 100% American. But what about the deep Jewish investment in remaining a people apart? And how was an assimilated turn-of-the-century Reform Jew to affirm his kinship with the despised racial others, the mass of supposedly “unassimilable,” new immigrant “poor Russian Jews” at the nation’s gates, without injuring the claim that Jewishness was no ethno-racial marker at all and Jews were 100% American?

Rights lawyering, the essay shows, was one solution to these thorny problems, a basis for renewing Jewish particularity — affirming one’s identity as, or identification with, the outsider group, one’s solidarity with the despised others, the strangers and downtrodden — but doing so as a member of a respected bourgeois profession and in terms of Enlightened, universal values enshrined in the U.S. Constitution. Reform Jewish lawyers invented — and sacralized — the secular calling of the Jewish civil rights lawyer, whose most important, and sometimes sole, public enactment of Jewish particularity was the defense of constitutional liberalism and the rights of racial others.

This liberal civic religion, or political theology, didn’t speak to the “masses” of new-immigrant “poor Russian Jews” in New York’s and other city’s Jewish “ghettoes.” Those looking for a modern, secular way of being Jewish found it in socialist Zionism and Jewish nationalism. They had their own lawyer-leaders, who insisted that Jewishness was everything the Reform Jews claimed it was not: a nation, a race, and a people with its own public political creed. They had a constitutional vision and vocabulary of their own that émigré Jewish lawyers and revolutionaries brought back and forth across the Atlantic. They demanded individual civil rights but also group rights of communal autonomy and national self-determination — in Palestine, but also in the Diaspora, in Russia, and even in the United States.

The final part of the essay briefly previews a book-length study of the epic clash a century ago, between lawyer-leaders of the “race Jews” and the “faith Jews.” It reconstructs a moment, when it was the left-wing of American Jewry that defended Zionism, and it was establishment outfits like the Reform Jewish elite’s American Jewish Committee, that assailed these nationalist ideas — partly out of fear of raising the lethal specter of a Jewish “state within the state,” but also out of principled misgivings. Much like Louis Henkin, a generation later, these committed liberals were crystal clear about the poisonous, illiberal aspects of ethno-racial nationalism, and worried about whether Jewish nationalism, if and when it had a state and an army at its disposal, could manage to prove different.