The Limits of Law: Approaches 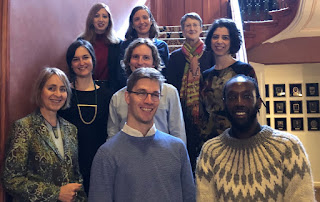 We asked the 2018-19 Davis Fellows the following question: how has your time at the Davis Center led to new insights about the reach and limits of law and legalities? Here is a set of answers that relate to methods, heuristics, and approaches (the other posts in this series are here and here):

Jonathan Connolly
Our conversations in the Davis Center put pressure on two seemingly simple terms. “Law” we seem to know in statutes and courtrooms, among jurists and lawyers. Or perhaps we don’t, for even these spheres point toward others. “Legalities” suggests something more: competing notions of legitimacy, layers of negotiation. If “legalities” unsettle the meaning of “law,” they also lead us to ponder the relation between legal history and other fields of historical scholarship. For me, it was the methodological implications of our discussions that proved most fruitful. In many contexts, from medieval England to post-colonial South Africa, legal sources provide glimpses into seemingly invisible social worlds. But if that fortifies legal history as a trans-substantive field, it also makes it difficult to separate law from politics, economics, gender, and other categories that are both subjects of study and approaches to history.
Perhaps, as both a challenge and promise, law and legalities can help mediate between the seemingly separate “turns” that have reshaped so many fields in the past several decades. The revival of economic history, to take one example, has recast the global and linguistic turns that preceded it. In this context, legal materials point in all three directions. It is impossible to understand lawmaking without culture and ideology; at the same time law is a primary means of structuring economic relations.
In my own work on post-slavery free labor, law assumes this dual function as a linchpin between cultural and economic history. My book manuscript, Worthy of Freedom, examines indentured labor migration and the category of free labor in the early period of emancipation. Law appears as a means through which the British colonial state sought to shape the political economy of emancipation. Yet it also stands as a reflection of shifting notions of race, civilization, and freedom. Tracing the “normalization” of indenture, the book follows the remaking of free labor in both material and conceptual terms. In this sense, it interrogates a methodological problem illuminated more broadly by many of our Davis Center conversations: the extent to which law is both cause and effect, at the intersection of political, social, and economic histories of change.

Between the Davis fellows’ Wednesday meetings and the Davis Seminar’s Friday papers, we discussed legal history topics that covered an impressively broad geographic scope (nearly every continent) and temporal range (late antique to modern). Perhaps paradoxically, this experience emphasized for me the limits of historiography, rather than of law and legalities.
My first book, The Beginnings of Islamic Law, focused on integrating rigorous historiography in Islamic (and Jewish) legal studies. The book elaborated how essentialist and evolutionary ideas obfuscate the diversity and multivocality of the Islamic legal tradition. Chris Tomlins described my book as “a ‘historicist’ revolution in the history of Islamic and Jewish law, a revolution that will create a legal history that grounds law in its social and historical context.” And then he warned me that the path of historicist contextualism would lead me to a cliff. As Tomlins has written about extensively, historicist contextualism often limits legal historiography to micro-analyses. These micro-analyses concentrate on the contingencies and particularities of law in specific temporal and geographic contexts – contexts that are identified and constructed by the legal historian. Although my first book combined historical contextualism and structural analyses of law, it emphasized the former in response to limiting frameworks that dominate in both Jewish legal studies and Islamic legal studies. Tomlins has cautioned that an unintended consequence of historical contextualism is that legal historians shy away from grand historical narratives; consequently, they neglect macro processes of legal continuity/change. As a Davis fellow, I found renewed appreciation for the critique that historical contextualism can prevent large-scale legal histories or understandings of law. As Jon and Natasha observe, many of our internal conversations focused on heuristics and approaches in specific case studies. Although we talked around law, about various legal contexts, law itself was rarely the object of analysis.
Sometimes it even seemed that law was the last issue anyone wanted to talk about. As Tom notes, it was only after several months that we pondered how we define law. That discussion took place in response to a prompt (“find the law in a specific exhibit in the art museum”) that I assigned the group. The ensuing discussion demonstrated that the fellows see law very differently. Moreover, law is often defined too narrowly, in ways that prevent broad-scale, transhistorical analyses of law. I have had similar experiences when presenting my current research, which explores the overlaps and distinctions between secular law and Islamic law or Jewish law. Interlocutors often ask me, “secular law where and when?” Having insisted that the equivalent question be asked about Islamic law and Jewish law in order to avoid essentialism and counter prevalent stereotypes and misunderstandings, I now find myself explaining what makes ‘secular law’ a viable analytic category. Undoubtedly, law varies according to time and place; yet, there is also continuity within legal traditions, particularly when compared to other traditions. At any given historical moment and in any precise geographic location, law is the outcome of specific conditions and broad patterns.
My experience as a Davis Fellow has reinforced that ‘law & legalities’ is not limiting, but rather that many legal historians today experience it as too big—and, perhaps, even overwhelming.

It is remarkable that it was about 6 months into our conversations at the Davis workshops before we discussed explicitly what we thought “law” might be. For a group of historians all working on law, this might seem like a grave oversight. But I think it is also a testament to the almost infinite malleability of law, its capacity to stretch and bend and shift its shape across different contexts, and as Jon points out, to facilitate a kind of transfer between other domains such as the economy and culture. This is partly what makes our conversations possible, of course, and one of the pleasures of speaking with my colleagues this year has been to see how other historians – researching different periods for different ends – work with law.
But the curious power of law to insinuate itself into ‘every bloody level of society’, as E. P. Thompson famously put it, also presents an analytic trap. Why does law seem as though it is always-already there in various historical contexts? As Lena suggests, our disciplinary habits as historians – ever contextualizing and narrowing in our efforts to explain instances of law – may work against the expansive logic of law itself, as it is almost always expanding outwards to fill more space (and indeed, as Natasha shows, time as well). But if answers to this question remain diffuse, in our collective discussions we were perhaps able to outline its parameters more clearly.
For my part, reflection on the concept of ‘legalities’ came as a late but surprisingly useful means of framing these issues as I spent my time at the Davis Center completing my book, Law in Common: Legal Cultures in Late-Medieval England (forthcoming with OUP). The book is about the ways in which ‘common’ people in the long fifteenth century thought about law, as they encountered it through the plethora of local courts to which they ordinarily resorted. This focus on local institutions has tended to drag my arguments towards contextualism, an impulse I had always been trying to resist by focusing on broader patterns of common legal engagement, for example through making alterations to the landscape, or using written documents, subjects I’ve written about elsewhere.
But in the concept of legalities – which I take to refer, broadly, to laws effects in the world – I found a way of understanding these patterns in more structural ways: rather than trying to identify “law”, which may always elude us, identifying “legalities” as the effects of law’s differentiation can draw a wider field of activities and ideas into our analytical gaze. It is a move that may not ultimately avoid the ‘cliff’ of contextualism, but it is one, I think, that allows us to sway over the precipice and still keep our balance, at least for the moment.

“The more law has developed its function as an ordering and measuring apparatus capable of completely formalizing life,” writes classicist Aldo Schiavone in his recent epic The Invention of Law in the West, “the more it has tended to distance from itself the dimensions of history and mutation.” This tension, in his telling, goes back to the Roman inception of law itself:

Between nomos and chronos – between rule and time – there was, from the very origins of Western thought, a reciprocal exclusion: the intrinsic vocation of order, its telos, is to halt the process of becoming. If the norm and the rule are perceived as ‘revealing of being’ […] their dimension is that of unlimited duration, not that of transformation; time is, with respect to them, pure destruction, external and irremediable negativity.

In this rendering, law’s very vocation is to resist time – to escape its trap and its stain, to abstract up and out from its oscillation towards a transtemporal stability. Where does that leave the historian of law? Do we write law’s history against its will – prying historicity from the jaws of normativity?

Our Davis discussions have traversed moments where we can see the friction between nomos and chronos unfolding in history – for example when the colonial state attempts to codify customary law in South Africa, ossifying living law into frozen benchmarks that obstruct politics and historical inquiry alike. But law’s relationship to time unfolds as a methodological problem, too. For Schiavone, it prompts a kind of archaeology: a project of “deciphering the content hidden deep within the inner structures of normativity – the history canceled by the form – and of bringing it back up to the surface, into the light of day.” Reinhart Koselleck, for his part, argued that law’s slower, longer structures of duration required legal historians to grapple with time in especially pointed ways. Today, after decades in which a particular genre of contextualism dominated legal history in the Anglo-American academy, various new methodological debates turn on law’s relationship to temporal scale. Lena points to Chris Tomlins’ interventions and to the limits of micro-contextualism in perceiving broad continuity in legal traditions. Elsewhere we see the return of Marxist legal history, as well as alternate breeds of structuralism. In the history of international law, meanwhile, Anne Orford has argued that anachronism has a legitimate place because law’s core business is “making meaning move across time.” In my own work, I am interested in exploring the idea that law’s purported transtemporality itself has a history. I look to isolate not only its temporal assumptions, images, and projections, but its precise tools and techniques for bucking time and insulating itself from history’s mutation – what we might call the technologies of its temporal indifference.