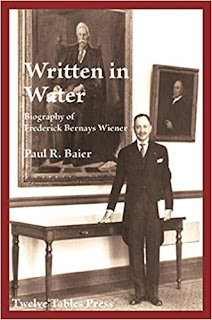 Frederick Bernays Wiener, was a leading advocate at the Bar of the Supreme Court in the last century. Colonel Wiener argued, and won, cases that set the legal boundaries between the military and civilians, as well as those between what is public and what remains private. No cases could carry greater social weight; ergo, few collections of papers could be more important. Written in Water is not the usual legal tome. There is nothing usual about Frederick Bernays Wiener just as there is nothing usual about Mr. Justice Frankfurter or Frederic William Maitland. Both of whom also appear in these pages. Written in Water is a lively celebration of Frederick Bernays Wiener and his times. We experience his slightly angular personality and his inimitable legal pursuits. Colonel Wiener was of the old school: charming, courteous, elegant, learned, witty, generous. True, Colonel Wiener did not suffer fools lightly. He did not suffer them at all. Frederick B. Wiener abhorred stupidity. He and Margaret Thatcher would have enjoyed a London pub together. Written in Water fulfills both halves of Horace's dictum. It charms; it instructs. And we fortunate readers, will smile as we learn. Paul came to know Colonel Wiener well. He produced a television interview with Colonel and Mrs. Doris Merchant Wiener at the LSU Law Center. The thought of a book saving Colonel Wiener for all time followed at the suggestion of Washington, D.C. lawyer Jacob A. Stein, founding partner of Stein, Mitchell & Muse.