Out this month is Free Justice: A History of the Public Defender in Twentieth-Century America (University of North Carolina Press), by Sara Mayeux, Vanderbilt Law School.  It appears in the book series Justice, Power and Politics, edited by Heather Ann Thompson and Rhonda Y. Williams. 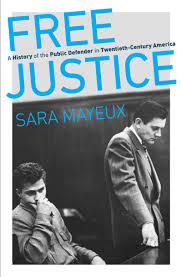 Every day, in courtrooms around the United States, thousands of criminal defendants are represented by public defenders--lawyers provided by the government for those who cannot afford private counsel. Though often taken for granted, the modern American public defender has a surprisingly contentious history--one that offers insights not only about the "carceral state," but also about the contours and compromises of twentieth-century liberalism.

First gaining appeal amidst the Progressive Era fervor for court reform, the public defender idea was swiftly quashed by elite corporate lawyers who believed the legal profession should remain independent from the state. Public defenders took hold in some localities but not yet as a nationwide standard. By the 1960s, views had shifted. Gideon v. Wainwright enshrined the right to counsel into law and the legal profession mobilized to expand the ranks of public defenders nationwide. Yet within a few years, lawyers had already diagnosed a "crisis" of underfunded, overworked defenders providing inadequate representation--a crisis that persists today. This book shows how these conditions, often attributed to recent fiscal emergencies, have deep roots, and it chronicles the intertwined histories of constitutional doctrine, big philanthropy, professional in-fighting, and Cold War culture that made public defenders ubiquitous but embattled figures in American courtrooms.

"This is an excellent work of legal history that speaks to the present as we systemically think about the connections between poverty, race, incarceration, and the criminal justice system."--Felice Batlan, author of Women and Justice for the Poor: A History of Legal Aid, 1863–1945

"Mayeux reveals core features of American political culture and political economy across a changing twentieth century. This is a brilliant book that should be read by everyone interested in the dimensions of the contemporary American legal regime."--Hendrik Hartog, Class of 1921 Bicentennial Professor in the History of American Law and Liberty, Emeritus, Princeton University

"Sara Mayeux brilliantly uses the contested history of public defenders as a lens to examine and illuminate American conceptions of democracy, liberalism, socialism, and even our broader political culture.  Free Justice marks the dazzling debut of a supremely gifted legal historian."--Justin Driver, author of The Schoolhouse Gate: Public Education, the Supreme Court, and the Battle for the American Mind

"Free Justice details a remarkable transformation in the attitudes of white-shoe lawyers, Supreme Court justices, and law professors. In the early 1900s, they envisioned indigent criminal defense as an endeavor for private charity and equated public defense with totalitarianism. By mid-century, they insisted on public defense in criminal trials as a Cold War imperative. And by the end of the 1960s, necessity had forced them to redefine it as a vital element of the War on Crime. Only in the United States! Sara Mayeux's important, beautifully written book shows us the elite legal profession shaping and being shaped by society and reminds us of the tension between the Warren Court's great ideals and their implementation. Brava!"--Laura Kalman, author of The Long Reach of the Sixties: LBJ, Nixon, and the Making of the Contemporary Supreme Court