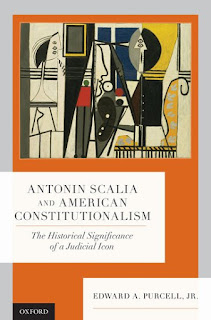 Antonin Scalia and American Constitutionalism is an in-depth study of Justice Antonin Scalia's jurisprudence, his work on the Supreme Court, and his significance in the history of American constitutionalism. After tracing Scalia's rise to Associate Justice and his subsequent emergence as a hero of the Republican Party and the political right, this book reviews and criticizes his general jurisprudential theory, arguing that he failed to produce either the objective method he claimed or the correct constitutional results he promised. Focusing on his judicial performance over his thirty years on the Court, it examines his decisions and opinions on virtually all of the constitutional issues he addressed from the fundamentals of structure (federalism, separation of powers, and the Article III judicial power) to specific interpretations of most major constitutional provisions involving governmental powers and the rights of individuals under the Bill of Rights and the Fourteenth Amendment. This book argues that Scalia applied his jurisprudential theories in inconsistent and contradictory ways and often ignored, distorted, or abandoned the interpretive methods he proclaimed to reach the results he sought, results that were aligned with and supported by the post-Reagan Republican coalition. Scalia was far more consistent in enforcing such ideologically compatible results than he was in following his proclaimed jurisprudential theories. Finally, assessing Scalia's historical significance, Antonin Scalia and American Constitutionalism argues that his jurisprudence and career are particularly illuminating because they exemplify--contrary to his persistent claims--three paramount characteristics of American constitutionalism: the inherent inadequacy of originalism and other formal interpretive methodologies to produce consistent and correct answers to controverted constitutional questions; the close relationship that exists, particularly so in Scalia's case, between constitutional theories and interpretations on one hand and substantive political goals and values on the other; and the unavoidably living nature of American constitutionalism itself. All in all, Scalia stands as a towering figure of irony because his judicial career deconstructed the central claims of his own jurisprudence.