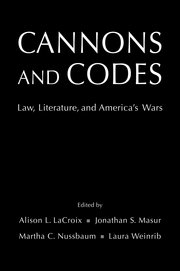 It can be said that western literature begins with a war story, the Iliad; and that this is true too of many non-Western literary traditions, such as the Mahabharata. And yet, though a profoundly human subject, war often appears to be by definition outside the realm of structures such as law and literature. When we speak of war, we often understand it as incapable of being rendered into rules or words. Lawyers struggle to fit the horrors of the battlefield, the torture chamber, or the makeshift hospital filled with wounded and dying civilians into the framework of legible rules and shared understandings that law assumes and demands. In the West's centuries-long effort to construct a formal law of war, the imperative has been to acknowledge the inhumanity of war while resisting the conclusion that it need therefore be without law. Writers, in contrast, seek to find the human within war--an individual story, perhaps even a moment of comprehension. Law and literature might in this way be said to share imperialist tendencies where war is concerned: toward extending their dominion to contain what might be uncontainable.

Law, literature, and war are thus all profoundly connected--and it is this connection this edited volume aims to explore, assembling essays by preeminent scholars to discuss the ways in which literary works can shed light on legal thinking about war, and how a deep understanding of law can lead to interpretive insights on literary works. Some of the contributions concern the lives of soldiers; others focus on civilians living in war zones who are caught up in the conflict; still others address themselves to the home front, far from the theatre of war. By collecting such diverse perspectives, the volume aims to illuminate how literature has reflected the totalizing nature of war and the ways in which it distorts law across domain.

TOC after the Jump.  DRE

PART I: FORMING A NATION THROUGH WAR'S CRUCIBLE

Chapter 2: Law and War in the New World: The Last of the Mohicans, The Spy, and The Pioneers, Douglas Baird

Chapter 3: New Light on the Trial of Billy Budd, Richard H. McAdams and Jacob I. Corré

Chapter 5: Law and its Limits in Albion Tourgée's Bricks without Straw, Kate Masur

Chapter 8: Undivided Loyalty: The Problem of Allegiance in the Literature of War, Alison L. LaCroix and William A. Birdthistle

Chapter 9: Law and Legitimacy in A Farewell to Arms, Laura Weinrib

Chapter 12: Sympathizing with Both Sides: Racism and American Intervention in Vietnam, Paul Woodruff

Chapter 13: Paul Beatty, the Rhetoric of War, and the Selling Out of Civil Rights, Elizabeth Anker

Chapter 14: How War Makes (and Unmakes) the Democratic State: Reading The Reluctant Fundamentalist and Exit West In A Populism Age, Aziz Z. Huq