Tomorrow (Friday, April 16, 2021) from 12:15pm-1:20pm Central Time, Martha S. Jones, Society of Black Alumni Presidential Professor, Professor of History, and a Professor at the SNF Agora Institute at The Johns Hopkins University, will deliver the 2021 Maurice and Muriel Fulton Lecture in Legal History at the University of Chicago Law School–or rather virtually.  Register here.  Her topic is Vanguard: Leading on Voting Rights, Leading the Nation: 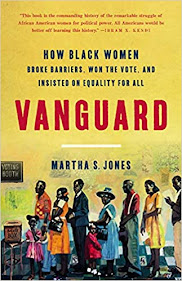 When Vice President Kamala Harris invoked six women from the past in August 2020, she explained it was on their shoulders that she stood: Mary Church Terrell, Ida B. Wells, Mary McLeod Bethune, Diane Nash, Fannie Lous Hamer, and Constance Baker Motley. Harris is the inheritor of these women of the Vanguard. For them, the 19th Amendment was a milestone but not a victory. When we appreciate what an open secret Black women’s disenfranchisement was in 1920, the facts of the 19th Amendment fit awkwardly with events that feature light shows, period costumes, and marching bands. Members of Congress who promulgated the 19th Amendment, state lawmakers who ratified it, and suffragists themselves all understood that nothing in its terms prohibited states from strategically using poll taxes, literacy tests, and understanding tests to keep Black women from registering to vote. Nothing in the new amendment promised to curb the intimidation and violence that threatened Black women who came out to polling places. Voting rights and voter suppression went hand in hand in 1920. Out of the ashes of these scenes, Black women built a new movement for voting rights, one that took them 45 years, until 1965, when they won passage of the Voting Rights Act.