Stuart Banner, UCLA Law, has recently published The Decline of Natural Law: How American Lawyers Once Used Natural Law and Why They Stopped (Oxford University Press), “an account of a fundamental change in American legal thought, from a conception of law as something found in nature to one in which law is entirely a human creation.” 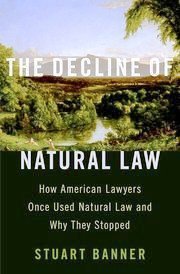 In The Decline of Natural Law, the eminent legal historian Stuart Banner explores the causes and consequences of this change. To do this, Banner discusses the ways in which lawyers used natural law and why the concept seemed reasonable to them. He further examines several long-term trends in legal thought that weakened the position of natural law, including the use of written constitutions, the gradual separation of the spheres of law and religion, the rapid growth of legal publishing, and the position of natural law in some of the 19th century's most contested legal issues. And finally, he describes both the profession's rejection of natural law in the late 19th and early 20th centuries and the ways in which the legal system responded to the absence of natural law.

The first book to explain how natural law once worked in the American legal system, The Decline of Natural Law offers a unique look into how and why this major shift in legal thought happened, and focuses, in particular, on the shift from the idea that law is something we find to something we make.