Rowman & Littlefield has published Race Unequals: Overseer Contracts, White Masculinities, and the Formation of Managerial Identity in the Plantation Economy (May 2021), by Teri A. McMurtry-Chubb (University of Illinois at Chicago). A description from the Press: 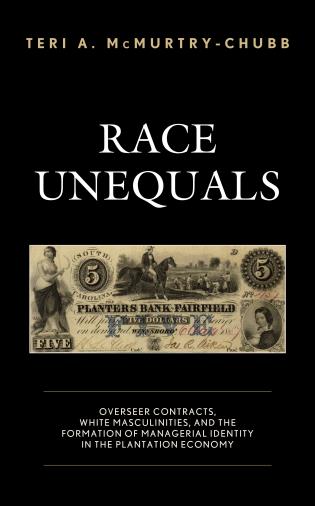 Race Unequals: Overseer Contracts, White Masculinities, and the Formation of Managerial Identity in the Plantation Economy is a re-imagining of the plantation not as Black and White, but in shades of White male identity. Through an examination of employment contracts between plantation owners and their overseers, and the web of public and private law that surrounded them, this book challenges notions of a monolithic White male identity in the antebellum South. It considers how race provided White men access to the land and enslaved labor that were foundational to the plantation economy, but how the wealthiest of those men used contracts, public law, and plantation management schemes to limit the access points by which overseers, the first managerial class in the United States, could achieve upward mobility as both White people and as men. In navigating the legal and social parameters of their employment contracts, overseers negotiated a white masculinity that formed their managerial identity. This managerial identity carried the imprint of white supremacy necessary to preserve inequities on the plantation, and perhaps in our modern workplaces as well.

A sample of advance praise:

Race Unequals is a nuanced and gripping portrayal of the world of white men who exercised power over enslaved people without legal ownership. Overseers at once stood in the shoes of the enslaver, brandishing the whip and chain, and themselves negotiated a subordinate position in white society, often in conflict with the planters who employed them. McMurtry-Chubb’s painstaking research in the records of contracts, litigation, and planters’ account books reveals the complexities of white masculinity in a world stratified by wealth as well as race, yet she also brings her subjects to life with an unerring eye for the telling detail and memorable story. — Ariela Gross

Meticulously researched and gracefully written, Race Unequals is an important chapter in the history of management. It moves tellingly from plantations, to legislatures, to courtrooms in the antebellum South. Vivid accounts of litigation—especially over planter regulation of overseers’ abuse of slaves and concerning what now would be called 'wage theft'—animate this intelligent examination of intraracial class conflicts among whites, their gendered dimensions, and their impacts on the lives of the enslaved.  — David Roediger