Beerman's "Journey to Separate But Equal" 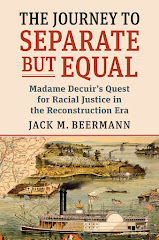 In The Journey to Separate but Equal: Madame Decuir’s Quest for Racial Justice in the Reconstruction Era, Jack Beermann tells the story of how, in Hall v. Decuir, the post–Civil War US Supreme Court took its first step toward perpetuating the subjugation of the non-White population of the United States by actively preventing a Southern state from prohibiting segregation on a riverboat in the coasting trade on the Mississippi River. The Journey to Separate but Equal offers the first complete exploration of Hall v. Decuir, with an in-depth look at the case’s record; the lives of the parties, lawyers, and judges; and the case’s social context in 1870s Louisiana. The book centers around the remarkable story of Madame Josephine Decuir and the lawsuit she pursued because she had been illegally barred from the cabin reserved for White women on the Governor Allen riverboat.

The drama of Madame Decuir’s fight against segregation’s denial of her dignity as a human and particularly as a woman enriches our understanding of the Reconstruction era, especially in Louisiana, including political and legal changes that occurred during that time and the plight of people of color who were freed from slavery but denied their dignity and rights as American citizens. Hall v. Decuir spanned the pivotal period of 1872–1878, during which White segregationist Democrats “redeemed” the South from Republican control. The Supreme Court’s ruling in Hall overturned the application of an 1869 Louisiana statute prohibiting racial segregation in Madame Decuirs case because of the status of the Mississippi River as a mode of interstate commerce. The decision represents a crucial precedent that established the legal groundwork for the entrenchment of Jim Crow in the law of the United States, leading directly to the Courts adoption of separate but equal in Plessy v. Ferguson.

Professor Beerman discusses the book here.  Encomia after the jump.

“Racism in the United States dismantled the Civil War’s legal achievements and built the world of continuing and expanding racialized segregation, deprivations, and indignities—but how did this come to pass? It took the particularly effective combination of White resentment, judicial activism, legal abstractions, and political backlash to strip free people of color of rights, wealth, and status as shown in this detailed yet vivid and accessible account by Jack Beermann. Thanks to this book, the little-remembered Supreme Court rejection of state antidiscrimination laws and the valiant but unsuccessful efforts of Josephine Decuir and her lawyers take their rightful place in the crucial reckoning with vigorous federal destruction of equal treatment in the United States. Read this book to understand how ‘technicalities’ of inheritance law practice, the ‘dormant Commerce Clause,’ and Southern transportation policies mixed with White status desires to block equal treatment laws and create the ‘separate but equal’ regime.”

“It’s about time the much-neglected US Supreme Court ruling Hall v. Decuir (1878) received serious book-length attention, for this ‘long-forgotten’ decision is more than an ironic milestone on the road to Plessy. In Jack Beermann’s telling, it is no less a poignant turning point in the decisive marginalization of nineteenth-century Louisiana’s mixed-race community. We owe him a huge debt for wresting this maddeningly tragic story from history’s hidden shadows.”