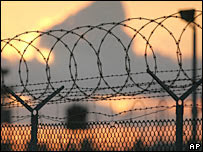 This announcement appeared recently on the website of the National Coalition for History. Hat tip.

On April 26, 2007, the National Coalition for History, the American Historical Association, and twenty other organizations wrote to U.S. Attorney General Alberto Gonzales and Archivist of the United States Allen Weinstein to express concerns about the possible destruction of records relating to the cases of detainees being held at the U.S. Naval Base at Guantanamo Bay, Cuba. A recent federal court Protective Order concerning the case records could possibly be interpreted to authorize or direct the destruction of government records that should be permanently preserved, such as the Combatant Status Review Tribunal record and interview notes.

The Protective Order requires that “All documents containing classified information prepared, possessed or maintained by, or provided to, petitioners’ counsel (except filings submitted to the Court and served on counsel for the government), shall [u]pon final resolution of these cases, including all appeals, … be destroyed by the Court Security Officer.” The protective order permits, but does not require, the government to retain one complete set of any such materials.

The organizations’ letters ask the Attorney General and the Archivist to ensure that a complete set of the records is retained, and permanently preserved as a set, in order to ensure an accurate historical and legal record.

The letter to Gonzales itself says: "as you know, federal statutory records retention requirements mandate retention by the government of a set of the records. Further, the government and the public would be best served by the permanent retention of the materials."
Photo credit: BBC.
Posted by Mary L. Dudziak at 9:14 AM