Intellectuals and other coffee addicts everywhere must pause and raise a mug to Alfred H. Peet, who died last Wednesday in Ashland, Oregon at the age of 87. "The way Americans think about coffee and drink coffee are a direct result of his teachings," said Corby Kummer, author of The Joy of Coffee. "His influence cannot be underestimated."

When Peet, who was Dutch, came to the United States in 1955, "America 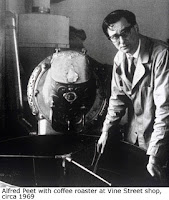 had a reputation internationally as having coffee that tasted like dishwater," Jim Reynolds of Peet's Coffee said. "He looked at it as something of a crime." "Everybody was drinking coffee that came out of a can," remembered Alice Waters. Peet came to be called "the grandfather of specialty coffee," and trained the founders of Starbucks. "He was the big bang," said Kumer. "It all started with him."


Even as the coffee revolution took off, Peet chose to keep his company small. The original Peet's (where I stood in line many years ago) is still in north Berkeley. And, of course, you can find Peet's on-line, and order a pound of Major Dickason's.


The New York Times obituary is here. Peet is remembered on the Peet's Coffee website here.
Posted by Mary L. Dudziak at 11:14 AM