Reviewed: Collin, The Time of the Rebels (on the Serbian youth uprising since 1998)

The Time of the Rebels by Matthew Collin (Serpent's Tail) is reviewed for The Guardian by John Savage. This book about a youth revolution is not about the 1960s, but about the past decade. Savage writes:
At dawn on October 5 2000, thousands of young Serbs descended on Belgrade, the c 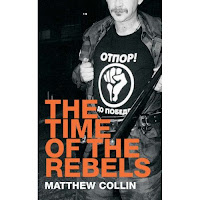 apital of Slobodan Milosevic's regime. Some had armed themselves with petrol bombs and clubs, others were intent on less violent forms of protest: when one group met a roadblock on the edge of the city, they simply lifted the policemen - who had disobeyed their orders to fire on the protesters - and dumped them by the side of the road.
The protesters were determined on one thing: the president must go. Despite the fact that the democratic candidate, Vojislav Kostunica, had attained a majority in the presidential election, Milosevic refused to step down. Once in Belgrade, these young activists - marshalled by "urgent electronic beats" - made for the Serbian parliament. Bursting through police lines, they set the building ablaze. On the next day, Milosevic admitted defeat.

The vanguard in this extraordinary display of people power - as thousands upon thousands of Serbs took to the streets of Belgrade - were members of a youth movement called Otpor ("resistance"). Originating in 1998 - the year that Milosevic had tightened the regime's control over the universities - this loose, shadowy group had avoided conventional politics in favour of snappy sloganeering, absurdist gestures (derived from Monty Python) and outright mockery.
Inspired by western youth culture and revolutionary theorists such as Gene Sharp - whose book From Dictatorship To Democracy lists 198 peaceful ways to resist and undermine dictatorships - Otpor aimed at nothing less than "a revolution in the mind". The sense of possibility that they sought to awaken both harked back to 1968 - "the year of the barricades" in Paris, Warsaw, Prague and Belgrade - and projected forward into the 21st century.
The Time of the Rebels traces Otpor's influence on the peaceful revolutions that swept through the former Soviet Union in the first few years of the current decade. In each case, the agenda was the same: fury at institutionalised corruption and repression, and a deep longing for democracy. For those involved it was a heady time, as they stepped over the line between acquiescence and resistance. "All my previous life," one young female activist remembered, "was now going away, like the sand through my fingers."...
Savage concludes:
Despite its bare bones production - no map, no index, no photos - The Time of the Rebels is a serious work that is an important addition to youth literature....It also suggests a whole new field for youth historians - there is still no survey in English of post-revolutionary Soviet youth movements and culture.
The full reveiw is here.
Posted by Mary L. Dudziak at 4:27 PM