Reviewed: Kronman, Education's End: Why Our Colleges and Universities Have Given Up on the Meaning of Life

"With a quiet fury against the many malefactors he sees everywhere in schools across the nation, Anthony Kronman, the former dean of Yale Law School, now submits to the public his brief for the prosecution against professors teaching the humanities in this country," writes William Chance, President emeritus of Emory University, in a review in the New York Sun of Kronman's new book, Education's End: Why Our Colleges and Universities Have Given Up on the Meaning of Life (Yale University Press). Chance writes that the book claims: "these professors have failed, one and all, in their primary duty — that of teaching 'the meaning of life.' Surrounded as they are by the deep richness of Western literature, philosophy, and political thought, they have been blind to the magnitude of this bounty and have instead witlessly surrendered to the forces of political correctness, affirmative action, feminism, and vapid theorizing."

Let's cut to the book description itself, from Yale University Press: 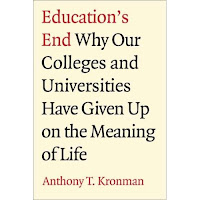 d why - is the most important question a person can ask. Yet under the influence of the modern research ideal, our colleges and universities have expelled this question from their classrooms, judging it unfit for organized study. In this eloquent and carefully considered book, Tony Kronman explores why this has happened and calls for the restoration of life's most important question to an honoured place in higher education.
The author contrasts an earlier era in American education, when the question of the meaning of life was at the center of instruction, with our own times, when this question has been largely abandoned by college and university teachers. In particular, teachers of the humanities, who once felt a special responsibility to guide their students in exploring the question of what living is for, have lost confidence in their authority to do so. And they have lost sight of the question itself in the blinding fog of political correctness that has dominated their disciplines for the past forty years.
Yet Kronman sees a readiness for change, a longing among teachers as well as students to engage with questions of ultimate meaning. He urges a revival of the humanities' lost tradition of studying the meaning of life through the careful but critical reading of great works of literary and philosophical imagination. And he offers here the charter document of that revival.

Back to the review:

With lawyer-like diligence, Mr. Kronman builds his case carefully and patiently — but with one startling omission, to which I will turn. He describes the way in which higher learning in America has evolved — first with small colleges founded on religious principles and an awareness of moral responsibility, followed then by public universities dedicated to practical learning that would enhance the productivity of the individual states, and most recently by the advent of institutions of advanced learning based on the German model of scientific research. His prose is lucid, his patience exemplary, and his extensive scholarship elegantly preserved in 30 pages of footnotes.
Mr. Kronman's prosecution is fueled by his devotion to what he calls secular humanism and by his revulsion toward constructivism. Secular humanism is the perfect method "to explore the meaning of life in a deliberate and organized way even after its religious foundations have been called into doubt." Constructivism, the instrument of surrender to which all humanists have co-signed, affirms "the artificiality of all human values and the absence of any natural standards by which to judge them." Thus Western values wind up as no better than any others, there is no hierarchy of virtues, and power alone counts, but must be unmasked.

According to Chance, Kronman "argues that the natural sciences and the 'harder' social sciences, uninfected by relativism and lack of courage, have surged ahead to become the dominant practices of the academy," while "the humanities are no more than a 'laughingstock.'"

The one extraordinary omission in Mr. Kronman's bill of particulars is, alas, evidence. It is one thing to claim that humanists across the country have defaulted on what he believes is their primary duty — to teach "the meaning life." It is quite another to accumulate the facts — by analysis of curricula, by interviews with teachers and students, by a continuing exposure to what actually goes on within classroom after classroom, and by other forms of painstaking research. Then and only then can we ever know for sure what professors do.
Is it truly possible, even plausible, that the question about the meaning of life — the only real question, as far as Mr. Kronman is concerned — is never posed by any American professor? My own experience tells me that it is asked in thousands of ways, but often indirectly and only rarely at the outset of discussion. Smaller questions come first — how words work in books, who the characters are, what the sequence of action is, and what is at stake.

Chance also wonders whether "Mr. Kronman's question [is] the only one worth asking? If one were to teach The Iliad, might one not instead ask how to read the poem; or inquire about what heroism means; or investigate the nature of friendship, bravery, and loyalty? Might a humanist ask how wars start...?"
The rest is here.
Posted by Mary L. Dudziak at 3:38 PM