Banner, Possessing the Pacific: Land, Settlers, and Indigenous People from Australia to Alaska

Possessing the Pacific: Land, Settlers, and Indigenous People from Australia to Alaska by Stuart Banner, UCLA, has been published by Harvard University Press. Here's the book description: 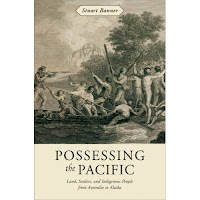 During the nineteenth century, British and American settlers acquired a vast amount of land from indigenous people throughout the Pacific, but in no two places did they acquire it the same way. Stuart Banner tells the story of colonial settlement in Australia, New Zealand, Fiji, Tonga, Hawaii, California, Oregon, Washington, British Columbia, and Alaska. Today, indigenous people own much more land in some of these places than in others. And certain indigenous peoples benefit from treaty rights, while others do not. These variations are traceable to choices made more than a century ago--choices about whether indigenous people were the owners of their land and how that land was to be transferred to whites.
Banner argues that these differences were not due to any deliberate land policy created in London or Washington. Rather, the decisions were made locally by settlers and colonial officials and were based on factors peculiar to each colony, such as whether the local indigenous people were agriculturalists and what level of political organization they had attained. These differences loom very large now, perhaps even larger than they did in the nineteenth century, because they continue to influence the course of litigation and political struggle between indigenous people and whites over claims to land and other resources.
Possessing the Pacific is an original and broadly conceived study of how colonial struggles over land still shape the relations between whites and indigenous people throughout much of the world.
Review and blurbs:
Publishers Weekly : [Banner's] overarching argument is an important one: dispelling the myth that colonization patterns were driven by policies set at home. This original and significant study will appeal to readers hoping to understand an issue whose ramifications are still felt today. Fascinating, convincing, and beautifully written, this is popular legal history that tells an important story about British and American settlers' perception and treatment of native rights to Pacific lands. A major new book in the field.--Bruce Kercher, Macquarie University, Australia In a style that is lucid and direct, Stuart Banner builds an extensively researched comparative study of settler societies that span the Pacific Ocean. He forces us to rethink the prevailing interpretations of the rise of Anglo-American dominance and the dispossession of indigenous peoples in the nineteenth century. --Michael Adas, author of Dominance by Design: Technological Imperatives and America's Civilizing Mission Remarkable for its breadth, vision, and mastery of native title and land expropriation issues, Possessing the Pacific is graced by brilliant writing. Stuart Banner's meticulous research, good judgment, and crisp prose combine to make this book a marvelous contribution to comparative history. An all-round triumph!--John Weaver, McMaster University, Canada This comparative study of the ways that the lands of Australasians, Polynesians, and North American Pacific coast tribes were taken by British and American governments is rich in evidence and wise in analysis. A wonderful addition. --Peter Karsten, University of Pittsburgh
Hat tip: Al Brophy.
Posted by Mary L. Dudziak at 9:57 PM