History and Politics in 2008

The Guardian (U.K.) looks forward to these books in history and politics forthcoming in 2008, including a new work by Philip Bobbit of the University of Texas and Columbia law schools: 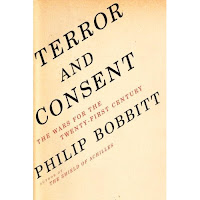 In history, 2008 begins with two big names tackling terrorism: the Samuel Johnson prize-winner Michael Burleigh's Blood and Rage: A Cultural History of Terrorism (Harper Press) in February, and in March Terror and Consent: The Wars for the 21st Century (Allen Lane) by Philip Bobbitt, acclaimed author of The Shield of Achilles. In April Whitbread-winner John Guy's A Daughter's Love (Fourth Estate) promises to "break open a secret" about Sir Thomas More by focusing on his daughter Margaret, his sole intermediary when he was imprisoned in the Tower for treason.

Also in April, Chris Harman's A People's History of the World (Verso) will eschew kings and queens to show how ordinary people have changed history from the bottom up; while Jack the Ripper and the East End (Chatto & Windus), introduced by Peter Ackroyd, will coincide with a major exhibition of Ripper-related nastiness at the Museum in Docklands. In May the bestselling author of Tommy and Redcoat, Richard Holmes (The military one), will examine the colourful personality of John Churchill in Marlborough: England's Fragile Genius (Harper Press), and in The Invention of Scotland: Myth and History (Yale) the late Hugh Trevor-Roper will mischievously observe that tartan and the kilt were invented by Englishmen. In June the brilliant historian of the Nazi era Ian Kershaw will examine the Holocaust in Hitler, the Germans, and the Final Solution (Yale), showing just how Germany's persecution of the Jews evolved into genocide. Also in June the Washington Post reporter Michael Dobbs will draw on new archival material in One Minute to Midnight: The Untold Story of 'Black Saturday', the Most Dangerous Day of the Cuban Missile Crisis (Hutchinson) to recreate that nail-biting moment of imminent nuclear Armageddon.

In July the author of The Italian Boy, Sarah Wise, tells the story of the Old Nichol, a notorious Victorian slum, in The Blackest Streets (from the newly revived Bodley Head). As might be expected, she has more sympathy for the slum's inhabitants (it was a breeding ground for communists and anarchists) than for the clergymen and do-gooders who wanted to put them all in internment camps or make them emigrate.

While the battle of the EU treaty (or is it a constitution?) is set to dominate British politics in the new year and well into the spring, the big political story in 2008 will be the US election in November and the tantalising prospect of regime change at the White House. In February Bloomsbury [will] publish The Bush Tragedy by Jacob Weisberg, which will sift through the wreckage of George W Bush's "plane-crash presidency" and in May the BBC's Washington correspondent Matt Frei's Only in America (HarperCollins) will argue that Washington DC has become the new Rome. [Weisberg's metaphor apparently is not tied to the idea that the Bush presidency was, in large part, made by the plane crashes on 9/11. The book description says: "In this revealing and defining portrait, Weisberg uncovers the “black box” from the crash of the Bush presidency. Using in-depth research, revealing analysis, and keen psychological acuity, Weisberg explores the whole Bush story. Distilling all that has been previously written about Bush into a defining portrait, he illuminates the fateful choices and key decisions that led George W., and thereby the country, into its current predicament."]

Looking even further ahead, Simon Schama's thematic history The American Future (Bodley Head) is out in October, while in November the prize-winning journalist Patrick Tyler's A World of Trouble: America in the Middle East (Portobello) promises us the definitive portrait of how the United States has conducted itself over the past 40 years in a region that we can be pretty certain will continue to make the news throughout 2008.
Posted by Mary L. Dudziak at 10:44 AM