Reviewed: Abramson, The Secret Circuit: The Little-Known Court Where the Rules of the Information Age Unfold

A book on the patent court is a trade book! Today the San Francisco Chronicle reviews The Secret Circuit: The Little-Known Court Where the Rules of the Information Age Unfold by Bruce D. Abramson (ROWMAN & LITTLEFIELD). At just under $35 for the paperback, sales will probably not be brisk, but how nice that the Chronicle noticed the book. Perhaps the press should knock down the price, increase the print run and market the book during the holiday season, when everyone will buy it for their favorite patent seeker (of which there are many). Joshua Spivak writes, in part: 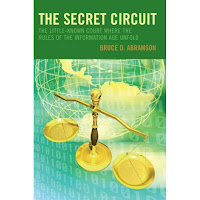 In "The Secret Circuit: The Little-Known Court Where the Rules of the Information Age Unfold," Bruce Abramson, author of "Digital Phoenix," a study of the information economy's collapse and revitalization, pulls back the curtain of American legal and economic policy to provide an engaging discussion of the recent developments and debates that have led to the creation of the country's strong patent system. Focusing on the relatively obscure U.S. Court of Appeals for the Federal Circuit in Washington, Abramson provides an excellent discussion of how and why America's politicians decided to strengthen patent protection, what this new arrangement meant for the American economy and whether further reforms need to be undertaken. Though the end of the book gets a little lost in the minutiae of the circuit court's non-intellectual property caseload, the overall work is sound, providing a great examination of an important engine for America's economic growth.

Abramson takes the reader back to the pre-reform period, where he shows how a focus on making patents easy to get yet difficult to enforce - plus a crazy quilt of appellate laws across the nation, which allowed companies to seek out courts that they knew would not uphold a patent - helped diminish the importance of intellectual property. While the federal government owned a huge number of patents, created by professors and universities using federal grant research, these patents were rarely turned into viable products, thanks to bureaucratic problems. And because of the law, universities were unable to make money from their extensive scientific-research portfolios developed through those federal grants.

A 1978 federal policy review inspired changes. With surprising bipartisan support, Congress and the Carter and Reagan administrations enacted several laws that reformed the patent system. Some are well known in legal circles, such as the Bayh-Dole Act, which unlocked the value of federally owned, university created patents by making it significantly easier for universities to receive and license the patents.

One of the key decisions, and the basis for the book, was to designate one federal appellate circuit as the gatekeeper for the law.